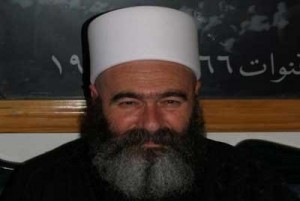 A Syrian Druze leader opposed to President Bashar al-Assad was killed Saturday in the city of Soueida, the Syrian Waqf Ministry and Druze Unitarians’ Sect has announced.

Druze Sheikh al-Aql Ahmed Salman Al-Hajari’s death was blamed on “a car accident,” according to the statement released by the Syrian government’s Syrian News Agency (SANA), stating he “died in a tragic car accident as when the car he was travelling in collided with another car on the old highway of Mardek, Shahba.”

The news, announced in a terse statement devoid of details, was also immediately reported by the Lebanese Ministry of Information.

Lebanon’s Druze leader, Walid Jumblatt, recently made headlines by announcing his support for Syria’s anti-government force. He also called on Russia to find a way to remove Assad and his family from the picture, and allow the Syrian people to settle their destiny in dignity and peace.

Jumblatt also marked the 35th anniversary of the assassination of his father Kamal Jumblatt Friday. The younger Jumblatt took over his father’s leadership during the 1975-1990 Lebanese civil war after his father was shot to death on March 16, 1977.

At that time and for years after, he supported Syrian intervention in the civil war — even while blaming Damascus for the deaths of his father and former Lebanese Prime Minister Rafiq Hariri in a massive 2005 car bombing in Beirut that killed 20 others as well. Syria denied the charges, and Jumblatt later reconciled with Damascus five years later, but said, “I forgive, but I do not forget.”

As he spread a Syrian revolution flag over the grave, he declared, “After 35 years, this is the day to tell the truth, to myself and to others… Long live free Syria!…The Syrian people will stay, but dictators will go.”