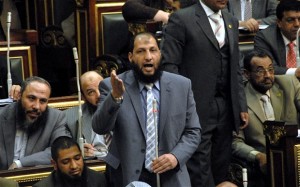 Anwar al-Balkimi, who won election to the Egyptian parliament for the Salafi, or ultra-traditional, Nour Party, was expelled from parliament over the incident, in which he at first claimed he had been mugged.

On Thursday, a prominent belly-dancer and actress, Sama al-Masri, told a state-linked newspaper that she was Mr Balkimi’s secret wife. She claimed that after discovering from reports of the scandal that he was already married and had young children, she was seeking a divorce.

She claimed that Mr Balkimi had supported her in her career and even bought her a car, but she was now suffering “emotional trauma” as a result of her discovery.

Mr Balkimi is still fighting the allegations over his plastic surgery, which the Salafis say is forbidden under Islamic law – and which more importantly seemed to demonstrate a vanity at odds with the unworldliness on which the Salafis rely to set themselves apart from Egypt’s traditional moneyed elites.

He was kicked out of the party as well as parliament over the incident.

The allegation of a secret marriage to an unveiled belly-dancer would be far more damaging, given the Salafis’ fundamentalist attitudes to the role of women.

But Mr Balkimi claims he has been set up by “liberals and the security services”, and that he had never met Miss Masri.

“I never heard of this lady except on Thursday when I was having breakfast with my wife and children and one of my friends surprised me with a phone call telling of what the belly dancer is saying against me,” he told the Al-Arabiya news channel.

“I have never ever known her before, I swear.”

He said he now intended to counter-sue her to protect his reputation.