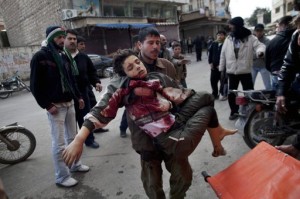 Syrian government forces Thursday reportedly shelled several dissident provinces across the country despite a renewed call from the United Nations chief to stop the violence.

At least 30 people, including a government soldier, were killed in the central, northern and southern provinces, reported opposition activists.

Most of the deaths occurred in Idlib, near the border with Turkey, and in the central provinces of Hama and Homs, they said.

Residents living on the Lebanese side of the border with Syria told dpa that heavy shelling on Homs, mainly its area of al-Kussair that is just few kilometres from northern Lebanon, could be heard.

‘Men were ordered to strip and line up in the centre of the city. They were later bundled onto buses to an unknown destination,’ he said.

Ten people, including women and children, were killed as they were boarding a bus in an attempt to flee shelling by government troops on the town of Sermin in Idlib, the activists said.

Rami Abdel Rahman, the head of the London-based Syrian Observatory for Human Rights, told dpa that the driver and nine members of two families were killed when the vehicle, which was heading to the Turkish border, was shelled.

‘Men were ordered to strip and line up in the centre of the city. They were later bundled onto buses to an unknown destination,’ he said.

In the southern province of Daraa, one government soldier was killed and four injured when a group of army defectors fired on a military vehicle, the Syrian Observatory for Human Rights reported.

Meanwhile, security forces intensified their crackdowns on the areas of Harasta and Reef Damascus on the outskirts of the capital, said the opposition.

The attacks came shortly after a video was posted on opposition websites claiming that the Free Syrian Army (FSA), a grouping of army defectors, has formed a council to coordinate operations inside Damascus.

News from Syria is hard to independently verify as the government has barred most foreign media from the country since the pro-democracy uprising started in March 2011.

The surge in violence came as UN Secretary General Ban Ki-moon Thursday renewed his call for an immediate halt to the year-long violence.

‘All the violence must stop,’ Ban said during a visit to Malaysia. ‘And there should be political negotiations in a way, which can meet the aspiration of the Syrian people and also humanitarian access should be established.’

On Wednesday, the 15-member UN Security Council, in what seemed to be a unified stand against Syria, backed diplomatic efforts pursued by the UN and Arab League envoy for Syria, Kofi Annan.

Syria, which did not react directly to the UN backing of Annan’s mission, has said it will accept ‘no ultimatums or threats,’ according to state television.

The United Nations estimates that more than 8,000 people have been killed in Syria’s year-long conflict.