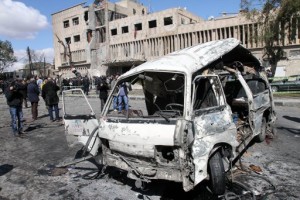 Meanwhile, fresh violence erupted in the eastern part of Syria as an al-Qaeda-inspired group claimed responsibility for two recent suicide bombings in the capital.

In a statement posted Wednesday on a militant website, an Islamist group called the Al-Nusra Front to Protect the Levant claimed responsibility for twin suicide bombings in Damascus on Saturday. The blasts, which targeted the air force intelligence building and the criminal security department, killed at least 27 people, the state-run news agency said.

The Associated Press could not verify the authenticity of Wednesday’s statement, which said the attacks were in retaliation for the Syrian regime’s shelling of residential areas in opposition strongholds in Homs, Idlib, Hama and Daraa.

“We tell the (Syrian) regime to stop the massacres against the Sunnis, otherwise, you will bear the sin of the Alawites,” the Al-Nusra Front said. “What is coming is more bitter and painful, with God’s will.”

The group also has claimed responsibility for earlier suicide attacks.

On Tuesday, Syrian soldiers backed by tanks seized the eastern city of Deir el-Zour from rebels, the latest opposition stronghold to fall to an offensive by the better equipped Syrian military.

Mansour, reached by telephone in Deir el-Zour, said the rebels quit fighting and took shelter in homes and apartments, fearing that protracted clashes would destroy the city.

Taking back rebel-held cities in the past weeks, government troops have often heavily shelled neighbourhoods before sending in troops, killing civilians and damaging buildings.

“They knew they could not hold control of the neighbourhoods, so they decided to stop fighting, knowing that the regime would bring in heavy weapons and kill many civilians,” Mansour said.

The rebels also lacked guns and ammunition, he said.