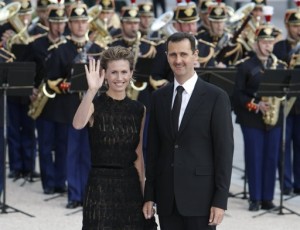 If he’s the Iron Hand, she’s his Velvet Glove.

The wife of Syrian President Bashar Assad bragged to friends that she was the “real dictator” and showed no remorse for her husband’s ruthless crackdown on anti-government rebels, according to leaked emails from the family’s private accounts.

Asma Assad’s messages to her inner circle were part of a trove of personal emails intercepted by Syrian rebels and sent to London’s The Telegraph newspaper last week.

The exchanges were especially damming for the British-born first lady, who had called for liberal reforms inside Syria in the months before the uprising began one year ago, The Telegraph reported.

Yet in a message to a family friend on Jan. 10, the first lady praised a speech by her husband during which he vowed to use an “iron hand” against anti-government protesters.

Asma Assad told the friend that the speech showed strength and sent a message that her husband’s regime was through “messing around.”

In another message sent about a month earlier, Assad, 36, joked about her husband’s reputation across the world as a gangster-in-chief while gabbing with a friend about their relationship.

“As for listening — I am the REAL dictator, he has no choice…” The Telegraph said.

The couple even cracked jokes at the expense of the people of Homs, where scores of rebels have been killed in sieges and rocket attacks by Assad’s forces, The Telegraph reported.

On Jan. 16, Bashar Assad sent his wife an email with a subject line “Student who obtained 0% on an exam.”

The email contained a list of goofball one-liners, supposedly a dim-witted student’s answers to test questions.

For example, one question asked, “In which battle did Napoleon die?” The answer was, “His last battle.”

The next day, Asma Assad forwarded the message to family members with the subject line, “A really bright Homsi student!”