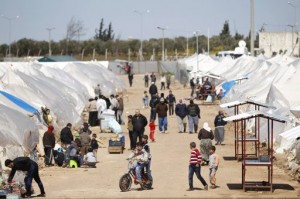 International Islamic Charitable Organization (IICO) announced on Monday a plan to sponsor 10,000 Syrian families who left their country and settled in northern Lebanon as a result of violence practised by the Syrian regime against civilians.

IICO announced that it has offered humanitarian aid, valued at USD 3.5 million, to 17,000 Syrian families in Lebanon.

Head of Committee for the Muslims of Asia and Development of Human resources in IICO Abdulrahman Al-Awadi told KUNA the Organization is preparing well equipped medical vehicles to provide treatment services to the wounded and sick Syrians in various areas of Lebanon including Akkar, Dnayyeh and Minieh.

IICO is offering material supplies; cash money and food to the Syrian families, besides financial support to three Lebanese governmental hospitals to cover the cost of major surgeries and deliveries, Al-Awadi said.

IICO allocated a budget for medical support for the Syrian refugees, he affirmed.

It is offering this support in coordination with Kuwait Finance House, Kuwaiti and Lebanese charity societies working in field of humanitarian relief.

The organization ensures decent housing, medical and educational services for Syrian refugees in Lebanon and Jordan and Turkey.