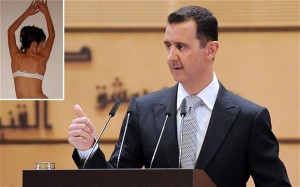 The undated picture shows the woman, clad only in white lingerie, pressing herself against a wall as her clothes lie discarded in a heap at her feet. On the day Mr Assad received the photograph, his troops opened fire on a number of funeral processions in Syria, killing at least 12 people.

It was discovered among thousands of emails from the personal accounts of the Syrian president and his wife after their passwords were smuggled out of Damascus by opposition groups.

The photograph was sent to Mr Assad on December 11 last year by a woman who is not his wife.

The email contains no words and it is not known who the woman in the photograph is.

Mr Assad’s personal account contains dozens of emails from a Yahoo account where the sender offers advice and passes on messages from people outside Syria.

While the emails deal largely with affairs of state they have a relaxed and often joking tone.

Members of the Syrian opposition believe the woman may also have a second email address under a false name which she used to send Mr Assad more intimate messages.

This account appears to have been set up on December 1 last year and as an apparent test an email was sent to Mr Assad’s address saying simply “hi”. Around 18 minutes later he replied “Hi and a half”.

Over several weeks, the exchange becomes more flirtatious as they swapped romantic music by the popular Lebanese singer Fairuz and at one point he appears to send her a gift certificate.

On January 17, Mr Assad received an email from the second account with a single Arabic character meaning “I love you” and on January 25 another email contains only an x, the popular sign for a kiss.

While there is no direct evidence of a sexual relationship, the revelation could prove highly damaging for Mr Assad, who has sought to present a united front with his British-born wife, Asma al-Assad, in the face of growing international isolation.

There is evidence in the emails that the Assads began to cling even closer together as the fighting grew fiercer in Syria. On December 28, she wrote to him: “If we are strong together, we will overcome this together…I love you…”

He replied: “i’m not worry about this, and i have no doubt.”