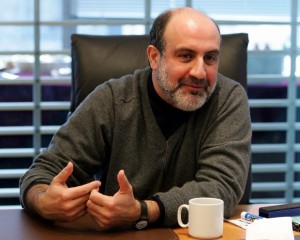 On Monday, the BBC broadcast the news that British Prime Minister David Cameron now relies on Nassim Nicholas Taleb as his closest advisor on economic affairs and much else. This Lebanese-American author and former Wall Street trader has captivated Downing Street, the BBC reports; he and the Prime Minister are mutual admirers.

“Nassim Taleb is probably the closest thing Cameron has to a guru,” according to Fraser Nelson, the editor of the London Spectator.

Then, on Tuesday, the campaign staff of GOP presidential candidate Ron Paul joyfully celebrated Taleb’s freshly TV-spread opinion that Paul, the most passionate anti-debt congressman, is the only candidate in the Republican primaries who makes sense on the issues that the United States now faces. Whether Paul has a chance to win the nomination or not, Taleb stands firmly behind him.

Those events suggest that a new wave of attention is engulfing Taleb. His reputation rests on his most famous accomplishment and his abrasive style. The accomplishment was anticipating and making serious money (enough to leave him comfortable) from both the 1987 and the 2008 financial disasters. His style is imaginative and forceful, full of confidence, with no concessions to the feelings of the opinion-mongers whom he denigrates.

He argues that we all know very little about the future. Worse, we are not aware of that fact because so many professional prophets convince us they can see what’s coming. He recommends abolishing the Nobel Prize in economics because economic theory has done so much harm.

Even in the free-wheeling, free-spieling world of freelance gurus, Taleb is a spectacularly odd character. He’s also one of the most interesting writers and talkers in that crowded scene. He sees himself more as a philosopher specializing in the theory of knowledge than an analyst. Still, he lacks the usual reticence of academic philosophers. He currently holds appointments at Oxford and New York University, but also holds the opinion that universities are better at public relations than generating knowledge.

He’s much given to adages and rude epigrams: “Academia is to knowledge what prostitution is to love.” He tells us that “Social science means inventing a certain brand of human we can understand.”

The quality that most obviously sets him apart is literary. How many people in his line of work have fought their battles under a flag (or brand) as romantic as the “Black Swan”? It sounds like a myth or a ballet, but it’s proven effective and coherent, with a neat story attached: For much of history, the world believed all swans were white because only white swans had been seen. A “Black Swan” meant an impossibility. But after real black swans were sighted in 1697, the term came to mean the reverse: something that seemed impossible but turned out to exist. John Stuart Mill used it that way.

For Taleb, a Black Swan is an event with extreme impact that exists outside expectations because nothing we know predicts it. The First World War was a Black Swan, and so was 9/11. So was the crash of 2008. Taleb titled his best-known book, The Black Swan: The Impact of the Highly Improbable. It sold three million copies. The same metaphor flows through his articles, as when he refers to dangerous thinking “where the Black Swans breed.” It’s become jargon in the British cabinet. David Willetts, minister of state for universities and science, says: “There’s a very close link between Black-Swan thinking and what we’re doing on health or education.”

Taleb admits that we cannot avoid Black Swans because our tools of prediction are limited. But we need to avoid “fragility” by becoming so “robust” (two key Taleb words) that even a Black Swan won’t do us in. As individuals or nations, we must refrain from dangerous debt levels. “Robustification” and “anti-fragility” are essential goals. In September, Random House will publish the latest collection of Taleb’s thoughts, Antifragility, having reportedly paid a $4-million advance.

There seems little doubt that the major event in Taleb’s adolescence helped shape his thought. He was born in Lebanon to Christian parents, an oncologist and an anthropologist, members of families prominent for many generations. In 1975, when he was 15, the Lebanese Civil War broke out, turning the most peaceful and enviable state of the Middle East into a nightmare that’s far from ended. Like many established families, Taleb’s found its status radically reduced.

No one believed that a devastating war could happen to Lebanon because it had never happened before. His homeland’s abrupt fall from grace was the original Black Swan in Taleb’s life.