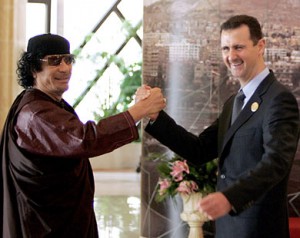 In an interview, Robert Fisk describes the imminent collapse of Assad’s regime against armed opposition as “wishful thinking”, and that Assad’s fight for survival will create bloody civil war. The Syrian Opposition’s lack of definition and leadership have made it hard for the ‘West’ to act, and how treating Arab uprisings as the same will lead to grave mistakes – Syria’s uprising is very different from Tunisia, Egypt and the rest.

I spoke to Robert Fisk, Middle East expert, Middle East historian, author and columnist with Britain’s Independent newspaper, in Beirut, and I asked him about that suicide bombing overnight and the troops said to be massing outside Damascus. What did he make of it?

Well, I think that the terrible blood-letting in Syria is going to continue. Um, it’s going to carry on. We’ve got a situation of near civil war between the regime and the people, and it’s going to continue. It’s a terrible thing, because the Syrians don’t want a civil war, but the regime, which is effectively an Alawite, um, Shiite dominated regime, uh, which asks the Christians and Jews to be their supporters – which they are, in effect, tragically – um, are effectively fighting the mass of the Sunni Muslim regime – or the Sunni Muslim group, who are the majority in Syria. And it’s a great tragedy in that we are seeing in a secular nation a sectarian war. And the Syrian war is going to continue. But I would say one thing – that, you know, people say Assad is about to collapse, because he’s horrible and nasty and he uses torture – which is true. I think we are being the victims of wish fulfilment. I’m not sure the regime will collapse that quickly. I’m not sure that the regime was going to collapse as swiftly as we think against the armed opposition. I’m not at all sure that things are going to follow the way in which our leaders, our Western leaders, are going to claim.

I don’t think the Bashar Assad regime is going to collapse soon. People who say it’s on the way of going, that Homs is the Benghazi of Syria – this is rubbish. The regime in Syria is very tough and very, um, repressive and knows how to repress people.

So, does Assad have any desire for reform, and could he do so even if he wanted? I mean, these emails the other day, the emails between him and his wife indicate a kind of a terrible disconnect between them and the rest of the country. So does he want reform?

Well, you know, I have a feeling- I first met Bashar Assad and his wife just after his father died of a heart attack, um, 12 years ago, and I got the impression then that he really wanted to change Syria. His wife is not a stupid woman. She’s been accused of being Lady Macbeth, Marie Antoinette, etc, etc. This is trial journalism She is a tough, ruthless woman, but she’s not stupid, and nor is her husband. I think that the problem is that, you see, Bashar al-Assad wants a new Syria. I think he genuinely wants it. But he can’t move it forward at the speed that it needs You know, in other words, the end of the Ba’ath party, the beginning of democracy. And he is faced with a situation where if he pushes for the kind of democracy he envisages, or perhaps does – let’s not give him too much credit. Um, therefore there will be a revolution against him. A corrective revolution against corrective revolution. If you’re Syrian, you’ll understand what I mean. Um, and I think that he can’t do that, and I think he feels that the best he can do is to just fight on. And I think he’s wrong. I don’t think the Bashar Assad regime is going to collapse soon. People who say it’s on the way of going, that Homs is the Benghazi of Syria – this is rubbish. The regime in Syria is very tough and very, um, repressive and knows how to repress people. And I think it will continue for quite a long time to come. I’m sorry to say, but I think it will.

So, you don’t sound optimistic about the West being able to do anything or wanting to do anything. Do you think the West is going to do something? Or is it maybe already too late? That he’s quashing everything?

When people lose their fear, they can never get their fear back. And this is what has happened in Tunisia, in Yemen, in Libya, in Egypt, and is what is happening now, today, in Syria.

I’ll tell you frankly. Just before Christmas I was invited to do an interview on Syrian state television with me, which I did much against my better wishes and better thoughts. And I was asked what was the future of the Assad regime, which is effectively what you’re asking me. And I said Bashar al-Assad is running out of time very fast, and you can no longer infantilise the people. You can no longer make them feel they’re little children going to school and if they disobey the rules, they’ll be taken away by the headmaster and beaten by the secret police or killed. And I made this point, and I said to Syrian television, ‘If you censor what I say, I’m going to repeat what you censor in my newspaper.’ And I came back to Beirut here where I’m speaking to you tonight, and I… (LAUGHS) I turned on my television. Of course, we can see Syrian television here. And there was me, and they ran it without a change because they wanted to let their people know that time was running out for the regime. Now, there’s something very interesting in that because, you see, they wanted to let the people know that the regime wanted change, but the question is does the regime of Bashar al-Assad really want change, or does it want a change in a picture? You know, like, ‘We would like to have a change, but maybe next year.’ And this is the big question.

Hillary Clinton and the American Defence Secretary, Leon Panetta, the difficulty they face with Syria is that they don’t really know who this Syrian opposition is. They haven’t kind of identified anyone particularly of any strength whom they should help. Do you agree?

Yes, I agree 101%. I was talking last night in Qatar. I go to Qatar regularly because they are ‘running the opposition’. Because Qatar wants to harm Iran like Saudi Arabia does. They don’t want democracy in Syria. They want to have the overthrow of Iran’s best friend in the Arab world, who is Bashar al-Assad. Now, let’s go back to that. I said to them, ‘What do you want? What is it you’re wanting?’ What the people of Syria want is dignity and justice. Dignity and justice. They want to feel they own their own country. And they feel that Assad believes he owns his own country, like Mubarak thought he was the owner of Egypt and Ben Ali was the owner of Tunisia. This is preposterous, ridiculous, stupid. But that’s what they thought. The great crisis and tragedy in Syria is 1) that the government does not realise that the people want dignity and 2) that in fighting to preserve themselves, the regime will produce a civil war which will kill, with great bloodshed, so many people, which is a terrible tragedy for Syria itself. We talk all the time about Haram, you know, the regime is killing the people. Yes, but we don’t talk about the actual bloodshed in Syria itself, which is most terrible and which we should be thinking about.

Does the world care enough about Syria? I only ask that question because, unlike during the spring in Cairo, the social media round the world has not really embraced the Syrian cause. That’s why I ask that, that’s all.

Yeah, I enjoy your stepping back from the question. I think the Syrians whom I meet in Beirut – and I go to Damascus still. I can still enter. I think the Syrians are appalled at the lack of historical knowledge of us Westerners. I think also, you know, they know what happened in Egypt and Tunisia. But I always say in my newspaper articles and indeed when I talk to New Zealand, Egypt was not Tunisia. Bahrain was not Egypt. Libya was not Bahrain. And Syria is not Libya. Every Arab country is different. But what you have here is a country, Syria, whose nationalist idea which was encompassed in the Ba’athist idea, and your Syrian-Australian viewers will know what I’m talking about. Um, the idea that there’s a nationalist centre of Syria is very strong, and you can’t just brush it off the desk and throw it away, because so many people want to overthrow Bashar al-Assad. Um, what we have to do, if we want to be honest – I try to be honest as a journalist – is to say to the regimes, like Bashar al-Assad – and I met Bashar al-Assad, I met Asma, his wife, who is a fine lady – is you have to deal with the reality, not the reality of 20 years ago, but now. And you must stop killing your people. Because at the end of the day, the situation is very simple: if you treat your people as infantiles, as children, where if you go to school and you offend the headmaster, you go to the police station and you are beaten and killed, is over. When people lose their fear, they can never get their fear back. And this is what has happened in Tunisia, in Yemen, in Libya, in Egypt, and is what is happening now, today, in Syria.