Religious Leaders in the Public Square

by Ghassan Karam
901
By Ghassan Karam “The closest thing to democracy (in the Arab world) is Syria” thus spoke the Maronite Patriarch Al Rai.
Share: 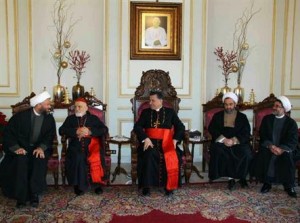 “The closest thing to democracy (in the Arab world) is Syria” thus spoke the Maronite Patriarch Al Rai. Such nonsense, had it been spouted by a lesser individual would have been grounds to have the speaker examined. There is nothing that can be defended in the above statement and unfortunately the Patriarch goes on his merry way of not realizing how vacuous he sounds. To make things worse the above was said just as he was embarking on a trip to visit the Jordanian Monarch and the Qatari Prince. Both were too well mannered to show their disgust with the inanity of these childish utterances that demonstrate a total lack of understanding of what is democracy and even what is the basis of Christian dogma. As if the above senseless views were not enough the Patriarch dared defend these faulty views upon his return to Lebanon by issuing a statement berating some Lebanese for not reading the whole text, as if the qualification “in the Arab world” was to be his savior from having committed , and not for the first time this unforgivable faux pas.

I guess his eminence has been too busy making silly statements left and right about areas and topics that are outside his area of expertise that he must have forgotten that the early Christians were thrown to the lions in the Coliseum of Rome rather than waver from the teachings of their master who urged them to “know the truth, and the truth will set you free.” The truth your eminence is that Bashar, whom you have called a reformer, is a butcher who murders men women and children for no reason except to stay on the “thrown”. Isn’t it blasphemy for a cleric to oppose the down trodden and to side with power, arrogance and tyranny. I always thought that Christians worshiped humility and worked to liberate the poor and the exploited since He taught them that “it is easier for a camel to go through the eye of a needle than for a rich man to enter the kingdom of God.”

What is even more frustrating than all of these shameful statements is the insistence of Patriarch Al Rai that he does not delve into politics. What in the name of God does one call statements justifying a state within a state, offering moral support to a corrupt and bankrupt dictatorship that is opposed by practically the whole world for its cruelty and its opposition to the right to dissent, to freedom and to the right to congregate, what is a judgment about whether systems are democratic or not and missives asking the world community to be blackmailed by terror but political statements.

Maybe, just maybe, there is a silver lining to all of this. Maybe Lebanese of all religious affiliations will come to recognize that these men of the cloth spend a lifetime reading their holy books and interpreting dogma and they should stick to their own knitting. It is clear that it is difficult for one to pray to two Gods, a civil secular mundane and political one and a highly spiritual and mystical existence. These two do not mix and it is high time that we ask the clergy to stay out of politics totally for the same reasons that they would not welcome a commoner interpreting their scriptures.

This last call is not directed only at Patriarch Al Rai but also at all other religious leaders. We need to implement the present constitution by eliminating sectarianism from the political sphere. The best and the most meaningful starting point for that would be for government to stop classifying citizen by the religion that they practice or chose not to practice. It is no one’s business whether I pray or to whom I pray. What is important is for government to treat all its citizens equally and to provide them with equal opportunity based on nothing else but merit. This would go a long way in diminishing and hopefully eliminating any civil role for religious leaders in the public square. Maybe then they would see the wisdom of being silent and of standing up to power at any cost. Then the religious leaders will get the respect that they deserve from those that chose to seek their spiritual guidance. There is no room for the religious in the public square as both Patriarch Al Rai and Mufti Kabbani have demonstrated recently.