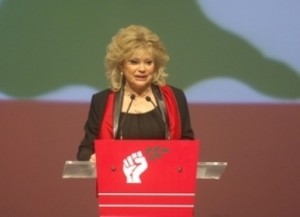 Civil society activists on Wednesday took the center stage during the rally organized by the March 14 forces to commemorate the seventh anniversary of the March 14, 2005 “Cedar Revolution.”

“Has our will really weakened? No, a thousand times no, the Cedar Revolution has not waned,” said prominent journalist May Chidiac in her speech at the rally.

“We are honored that the March 14 revolution was the first spark in the revolts against tyranny,” she added.

Turning to Syria, Chidiac stressed that “no matter how grave Syrian President Bashar Assad’s murders, the voice of justice will remain higher than all else and oppression will end.”

Addressing embattled Assad, she said: “If you have an ounce of humanity, Bashar, you would halt the massacre of children and rape of women and stop hiding behind clergymen, whether they are Muslim or Christian.”

Slamming Hizbullah and its controversial arsenal of weapons, Chidiac said “the claim that the weapons will defend the weapons no longer intimidates us,” stressing that “a repeat of the events of May 7, 2008 will not frighten us and neither will the 40,000 rockets” in Hizbullah’s possession.

The speeches of the activists this year replaced the speeches of March 14’s political leaders, who were featured in a video broadcast during the rally.

The leaders only gave brief statements in answer to the question “What is the Lebanon you dream of?”

Activist Khodr Faisal Mekkawi reassured the Lebanese that “if we are honest, justice cannot lead to strife.”

Meanwhile, activist Dima Sami al-Khatib stressed that “it is necessary to complete the rise of the state that protects everyone’s history and dignity.”

“We demand March 14 to establish a state that can create opportunities for the youth and end sectarianism,” she added.

Identifying himself as an activist expelled from southern Lebanon under the threat of arms, Hadi al-Amin said “the March 14 supporters believe that they should complete their mission to the very end.”

“They don’t believe in revenge, but rather in justice against all who grew accustomed to harming the innocent,” he stressed.

“The March 14 revolution belongs to all Lebanese citizens who believe in the army, law, constitution, freedom, and justice,” he noted.

Slamming the Syrian regime, Amin added: “If the martyrs of Qana and Gaza could speak, they would speak alongside the martyrs of Syria. A murderer is still a murderer whether he is a friend or brother.”

Activist Molouk Mihriz, who said she hails from Tripoli, noted that “we grew accustomed to the slogan of ‘one people in two countries’, but the actual slogan was ‘one monster in two countries’,” in reference to Lebanon and neighboring Syria.

“The revolution will not rest until the monster is overthrown,” she added.

Journalist and activist Michel Hajji Georgiou called for an “immediate international intervention” to end the bloodshed in Syria.

“Weapons do not make a man, but peace does, so let us come together, achieve peace in Lebanon now, and lay down the arms,” Hajji Georgiou said.

And he called on the March 14 camp to revive the call of slain journalist Samir Qassir and work on creating an “uprising inside the uprising.”