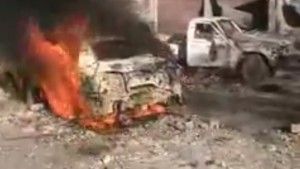 Nothing, whether good or bad, takes place without a reason. Sometimes we might not like a particular explanation of the rationale and /or motivation for a particular act but that does not give us the right to construct an irrational explanation so that it will fit into our view of the world. This mistaken understanding of the raison d’être of a development is what leads often to a wrong diagnosis. Such faulty explanation, unfortunately, result most of the time in promoting and sponsoring policies that are at best geared to symptoms. That course of action is best described as a palliative to cover the illness instead of a treatment that aims to attack the root of the problem. The palliative policy is deceptive while the one aimed at the roots is curative.

Kofi Annan is an honest and very well respected figure worldwide but his policy, or at least what has been made public about his policy, as a peace envoy to Syria suffers from the above tendency to deal with peripheral matters instead of focusing on the real disease. If it is true that Mr. Annan is attempting to broker a resolution to the Syrian crisis by either protecting the current regime or making an effort to preserve it then his mission is bound to fail.

It is true that no one wants to see more bloodshed in Syria and more destruction of its cities and infrastructure. But it is equally true that no one should be interested in arranging for an ineffective settlement that would allow the Syrian wound to fester and become even more dangerous to its body politic. Mr. Annan must know that the basic rationale for the Syrian uprising is to establish a government elected by the people and respectful of the intrinsic rights of each citizen to freedom of expression and freedom to congregate. There is no reason to believe that Mr. Assad is the person to lead the transformation of the Syrian society. If he had any interest, as peripheral as it might be, in reform or in changing the Syrian regime from its path of a single party dominated by one family then he sure has done a wonderful job of concealing such beliefs until it became politically expedient to claim that he is a reformist. It is so clear that the efforts at reform under the pressure of a popular uprising are anything but genuine. There is no reason why those that are being killed by the hundreds, men women and children, each day as a result of a direct order of the Syrian president to the armed forces should trust either these forces or those that are issuing such orders. Paradoxically, the same army that has failed to fire even one shot to regain Syrian land has shown no restraint in using all its might against those that it is expected to protect, its civilian citizens.

There are many principles that argue convincingly against the retention of either Basher Assad or any of his entourage. Chief amongst these is the essential idea that Syria does not need an evolution that keeps the exploiters and tormentors in charge but it needs a new democratically elected leadership to deal with the humongous challenges that the country faces in all fields, economic, social and political. The former Secretary general of the UN must not be allowed to forget that uprisings are the natural response to oppression and that the Syrian people have been oppresses and abused by the same small circle of family members and their relatives for over forty years. Another crucial idea that Mr. Anna should not forget is that “Those who make peaceful revolution impossible, make violent revolution inevitable” as stated by John Fitzgerald Kennedy. And obviously no one can ever afford not to be driven by the idea that rulers need always and forever the consent of the governed.

It is hoped that Kofi Annan can use his influence to stop the killing machine and to bring about a settlement based on the rule of law and transparent free elections. All Syrian factions must be given a free and equal access to the ballot box and an equally unencumbered right to run for any office. If Mr. Annan can accomplish this then the world and not only Syria will be grateful for his positive and meaningful accomplishments. Anything else will not do because it will be only a palliative.