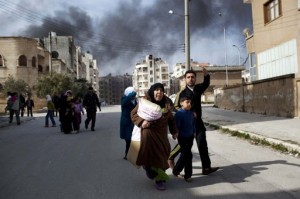 Syrian troops pushed ahead with a new assault on the northern region of Idlib on Saturday, shelling one of the centers of the uprising against President Bashar Assad’s rule and sending families fleeing for safety as armed rebels tried to fend off the attack.

Thick black smoke billowed into the sky. The military operation has raised fears that the regime is planning a new all-out offensive in Idlib like the bloody siege last month that captured a restive part of the city of Homs, further south.

While the fighting raged, U.N. envoy Kofi Annan met with Assad in Damascus during a high-profile international mission trying to bring a halt to fighting and arrange talks between the two sides to end the country’s yearlong conflict.

But the mission was already hitting dead ends. Assad told Annan that any political dialogue was doomed to fail “as long as there are armed terrorist groups that work to spread anarchy and destabilize the country,” according to the state news agency SANA. The regime blames terrorists acting out a foreign conspiracy for the uprising, not protesters seeking change.

The opposition as well has rejected dialogue, saying it is impossible to talk to Assad’s regime after a crackdown that the U.N. estimates has killed more than 7,500 people. Activists put the toll even higher, at more than 8,000.

In the town of Idlib, a number of families fled, clutching their belongings, according to an Associated Press team in the town, the main center of the northern region. A group of women and children huddled with blankets in a room of one building. Troops that are moving in place to encircle the town battered it with dozens of tanks shells from dawn until noon, the AP team said.

Armed opposition fighters dashed through the streets, taking cover behind the corners of buildings in clashes with the troops. Wounded fighters were pulled into trucks to be sped to clinics for treatment. A group of men used shovels to destroy speed bumps along one street to allow ambulances and other rescue vehicles to drive faster. Military reinforcements have been pouring into Idlib this week, including dozens of tanks and armored personnel carriers, activists said, reporting that dozens have been killed in the area in recent days. Their casualty reports could not be independently confirmed. The moves suggested the regime was now turning its focus on Idlib after recapturing the rebel-held district of Baba Amr in the central city of Homs, in a monthlong assault that reportedly killed hundreds and devastated the district.

The Homs bloodshed further fueled calls among Arab countries and the West for action to stop the crisis, which many fear is moving closer to civil war as the opposition turns more to armed resistance. The U.N. estimates that more than 7,500 people have been killed since Syria launched its crackdown on the uprising, which began a year ago as peaceful protests against Assad. Activists put the toll at more than 8,000.

Russian Foreign Minister Sergey Lavrov sought to defend his country’s stance on the crisis before Arab leaders, angered by Moscow’s blocking of international pressure on Syria’s president to step down. Last month, just as the Homs offensive was heating up, Russia and China vetoed a draft U.N. Security Council resolution that would have supported an Arab League peace plan calling on Assad to hand over his powers. That brought accusations that Russia, a longtime Assad ally, was giving Assad diplomatic cover to intensify his crackdown. “We are not protecting any regimes,” Lavrov insisted at a heated session of the Arab League in Cairo on Saturday. “We are protecting international law … We are not looking for a special prize or geopolitical interest here.”

He said Russia was trying to prevent “interference in domestic affairs of states, not to mention military interference” — something he hinted other Arab countries should be concerned about, given the upheaval of the Arab Spring the past year. “We certainly believe that all outside actors must be extremely careful in addressing problems which your countries are facing,” he said.

He said Russia was trying to “promote a peaceful resolution” to Syria’s crisis and that the immediate mission now is to halt violence and enable humanitarian assistance to reach those in need in Syria. “If we agree to this, then we shall not really engage in discussing who is to blame” for the bloodshed, he said. “This could be done later by authority or international structure empowered to do this.”

Speaking after him, Qatar’s prime minister sharply criticized Lavrov’s remarks. “There is systematic genocide by the Syrian government,” Sheik Hamad bin Jassem Al Thani said, adding that Arabs are not looking for a cease-fire anymore after “genocide” and “systematic killings” of Syrians.

Annan’s visit to Damascus marks a new international push for peace nearly a year after protesters took to the streets to demand Assad’s ouster, inspired by Arab Spring uprisings in Tunisia and Egypt. Since then, the regime has dispatched snipers, tanks and civilian gunmen to crush dissent. As the death toll mounted, protests have spread, and some have taken up arms to defend themselves and attack government forces.

Secretary-General Ban Ki-moon told reporters Friday that Annan’s priority is to immediately halt all fighting by government forces and opposition fighters — if not simultaneously, then first by government troops, followed by the opposition. Ban said a cease-fire should be quickly followed by inclusive political talks to resolve the yearlong conflict. But there is a widening gap between opposition leaders who say only military aid can stop Assad’s regime, and Western powers who fear more weapons will exacerbate the conflict.

So far, Western powers have declined to intervene. Unlike Libya, where a U.N.-sanctioned bombing campaign helped rebels topple Moammar Gadhafi last year, Syria has key allies in Iran and the Lebanese militant group Hezbollah, and shares a border with the region’s closest American ally, Israel. Outright war in Syria could spark a regional conflagration.

Annan, the former U.N. secretary-general, was appointed last month as the joint special envoy of the United Nations and the Arab League.