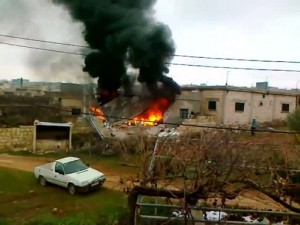 Free Syrian Army (FSA) commander Colonel Riad al-Assaad told Al-Jazeera television station on Saturday that the Syrian rebels on Saturday “shot down a helicopter [belonging to the Syrian army] and destroyed six tanks [in the city of] Edleb – where a number of soldiers defected [from the state army] along with two tanks.”

He added that before the UN and Arab League special envoy to Syria, Kofi Annan, “presents any solution” for the Syrian situation, he needs to make efforts “in order to halt the killing of the Syrian people.”

Annan arrived in Damascus on Saturday and met with Syrian President Bashar al-Assad.

The UN says that over 7,500 people have died in the year-long crackdown on dissent in Syria that has seen an intensive assault by government forces on protest cities such as Homs, according to AFP.