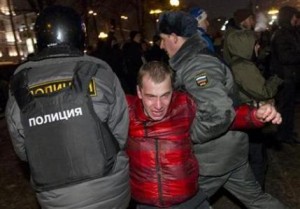 Russia’s opposition expressed concern on Tuesday that Vladimir Putin was resorting to old tactics to crush dissent after riot police detained hundreds of protesters challenging the legitimacy of his presidential election victory.

After three months of peaceful anti-Putin protests, police hauled away more than 500 people, including opposition leaders, who attended unsanctioned rallies in Moscow and St Petersburg on Monday or refused to go after a rally that had been permitted.

The police intervention sent a clear signal that Putin is losing patience with opponents demanding more democracy, openness and political reforms, and will crack down if they step out of line.

“Fear of his own people, the animal fear of losing power, and a reliance on the police baton – this is what we are seeing,” Boris Nemtsov, a liberal opposition leader, wrote in a blog.

Defeated presidential candidate Mikhail Prokhorov said in a Twitter message that he was outraged by the police action which he said “broke the tradition of the recent peaceful protest rallies in the country.”

But the restraint shown by most police, even as they bundled protesters into vans, also suggested that Putin is determined not to give his critics the chance to depict him as a dictator ready to suppress any challenge to his authority.

Police said they had acted in accordance with the law and Putin’s spokesman, Dmitry Peskov, defended the intervention.

“The opposition action consisted of two parts, legal and illegal. In both cases, the police acted with the highest professionalism and acted legitimately and effectively, within the competence of the law,” he said.

Witnesses said that although some protesters were hurt, and one said her arm had been broken, officers seemed intent on avoiding casualties at the main protest on Moscow’s Pushkin Square, often the scene of Soviet-era dissident protests.

But reporters saw police using tougher tactics against a group which tried to protest at Lubyanka Square, in front of the headquarters of the Federal Security Service, successor to the Soviet-era KGB.

“EYES OF A DICTATOR”

The pattern appears clear: Putin will allow a few isolated protests, the place and time of which is agreed with the authorities, as a safety valve for disillusionment with his 12-year domination of Russia among mainly urban demonstrators.

He could also offer some conciliatory gestures to appease the opposition. In one such move, the Kremlin has ordered a review of 32 criminal cases including the jailing of former oil tycoon Mikhail Khodorkovsky and the refusal to register a liberal opposition group which has been barred from elections.

But Putin, a former KGB spy, will do his utmost to prevent what he regards as more radical protesters undermining his return to the Kremlin for a third term as president after four years as prime minister. Dissent will be dealt with forcefully.

“We saw fear in the eyes of the dictator. We saw weakness. We saw a man who is unsure of himself,” Ilya Yashin, an opposition leader, told the rally at Pushkin Square after Putin shed a tear in his victory speech on Sunday.

“Has war begun? Why have they brought troops into the centre of our capital? Why the riot police? Who does he want to wage war with? Who is he protecting himself against?”

The U.S. ambassador to Russia, Michael McFaul, said on Twitter that the arrests were troubling and freedom of assembly and speech were universal values.

This earned him a rebuke from Russia’s Foreign Ministry in a tweeted reply, saying the Russian police had shown far more restraint than U.S. officers clearing anti-capitalist protesters from sites in the United States.

Foreign investors fear any confrontation with protesters would set back prospects for economic reforms which they say are needed to reduce Russia’s dependence on energy exports.

The United States has called for an independent and credible investigation into all allegations of voting irregularities in Sunday’s election.

Several European countries have also signalled their concern over the allegations of cheating but at the same time underlined a desire to keep working with Russia.

International monitors said there had been some improvements from a parliamentary poll on December 4 which observers said was marred by irregularities, but the vote was still unfair and heavily skewed to favour Putin.

Russia’s Foreign Ministry said the observers’ report was balanced overall but took issue with several criticisms although it did not say what they were.

Independent monitoring group Golos said that, based on returns its observers had seen, Putin would have won if there had not been fraud with a bare majority of just over 50 percent. The official tally put him on almost 64 percent.

The opposition has scheduled its next big protest in Moscow for Saturday. This will test its ability to continue to attract large crowds now Putin has won the election without bowing to any of its main demands.

“I used to love Putin, like any woman who likes a charismatic man. But now I think he is getting senile. Nobody can stay in power forever,” Vasilisa Maslova, 35, who works in the fashion trade, said at Pushkin Square.