The elusive tipping point in Syria 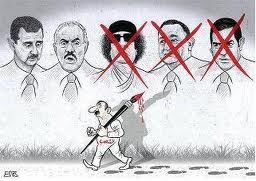 The Syrian military’s advance into the Baba Amr neighborhood of Homs has changed the dynamics of the resistance to the Assad regime – and put further pressure on Western policy-makers to find ways to help the opposition and protect Syrian civilians. But as Washington debates what’s next for Syria, Gulf states are already beginning to provide the opposition with arms and the funding to purchase them, sources in the region tell CNN.

To the Obama administration, the regime’s assault on Homs is an ominous sign. U.S. Assistant Secretary of State Jeffrey Feltman told a Senate hearing Thursday: “It’s important that the tipping point for the regime be reached quickly because the longer the regime assaults the Syrian people, the greater the chances of all out war and a failed state.

Baba Amr was the Free Syrian Army’s most significant stronghold – a hub for its activities and a place from which opposition activists alerted the world to the regime’s brutality through a sophisticated media operation. Now they have been silenced and the FSA scattered, and the Syrian army can turn its attention to other foci of resistance.

Robert Ford, U.S. ambassador to Syria, told the same Senate hearing that “the security services have retained their cohesion.” Against that, he said, the Syrian regime is under much greater stress than just a few months ago, with sanctions having an impact and the influential business community “increasingly unhappy.”

Ford described the Syrian economy as in a sharp downward spiral, with the Syrian pound losing half its value in less than a year.

Both officials steered away from committing the United States to arming the Syrian opposition in the face of the regime’s artillery onslaught against Homs, and attacks in towns like Idlib, Zabadani and Daraa. “People are looking at it, but there are a lot of complications that one needs to consider,” Feltman said.

One of those complications is the possibility of a meltdown that would play into the hands of Islamist extremists. With al Qaeda leader Ayman al-Zawahiri urging support for the uprising, Secretary of State Hillary Clinton has said Washington needs to be extremely careful about who would receiving any arms shipments.

And that’s not easy to know given growing differences among the opposition. The Syrian National Council, the political umbrella of the opposition, is largely made up of exiles. The Free Syrian Army has sprouted from within as unrest has spread; so have local co-ordination committees.

The SNC announced Thursday the creation of a military bureau to “track the armed opposition groups, organize and unify their ranks under one central command, defining their defense missions while placing them under the political supervision of the SNC,” a statement said.

Walid Al Buni, a senior member of the SNC, told CNN that “an office on the ground inside Syria will coordinate providing weapons to the FSA, and that will be the only mechanism to supply the weapons to the FSA.”

That did not sit well with senior figures in the FSA. Colonel Malek Al Kurdi, told CNN: “We are surprised on the formation of the military consultation council without taking our opinion….How could such a decision be taken by the SNC without informing Colonel Riad Al Assad leading the military opposition,” he asked.

The dispute has turned the spotlight on the SNC’s leadership, and especially President Burhan Ghalioun, a Paris-based professor who has struggled to unify the 270-member council – and especially reconcile liberal and Islamist members. Last week, about 20 prominent members of the SNC announced the formation of the Syrian Patriotic Group with the aim of building closer ties to the rebels inside Syria.

Sen. John Kerry, D-Massachusetts, chairman of the Senate Foreign Relations Committee, compares the state of the SNC unfavorably with that of Libya’s Transitional National Council last year. So does Clinton. “This is not Libya, where you had a base of operations in Benghazi, where you had people who were representing the entire opposition to Libya,” she told CBS.

The best hope, according to western diplomats, is that Syrian opposition groups can at least agree on a transition plan that would attract those Syrians still uncommitted to either the opposition or the regime.

If not, there is the prospect that the uprising in Syria will take on a religious complexion. Ford told the Senate hearing: “We have cautioned the opposition that if they declare some kind of big jihad they will frighten many of the very fence-sitters still in places like Damascus.”

There are also growing indications that foreign jihadists see Syria as their most urgent cause. Security on the Syrian side of the border with Iraq appears to have deteriorated, with the Iraqis announcing last week that military patrols would be stepped up to prevent smugglers and infiltrators from Syria. Of greater concern is the possibility that hundreds of jihadist fighters with the Islamic State in Iraq may be going in the other direction, as U.S. officials have suggested.

Sources in the Gulf say that Saudi Arabia and Qatar have already begun funding for (or the transfer of) small arms to the Syrian opposition. Kuwait’s parliament this week passed a nonbinding resolution in favor of supplying weapons to the Free Syrian Army.

Qatar’s prime minister, Sheikh Hamad bin Jassim Al-Thani, said this week: “We should do whatever necessary to help them, including giving them weapons to defend themselves.”

“I think they’re right to defend themselves by weapons, and I think we should help these people by all means,” Hamad said.

Qatar was one of the first states to arm the Libyan rebels last year.

But some fear that arming the Syrian opposition may lead toward an Iraq-style insurgency of ambushes and bomb attacks, without tipping the balance decisively against the Assad regime, which has a huge arsenal of battle tanks and artillery. Clinton has warned that supplying arms to the rebels may only hasten the slide toward civil war, heightening sectarianism and inviting in al Qaeda.

In Washington, foreign policy veterans like Sen. Richard Lugar, R-Indiana, say the United States should not overestimate its ability to influence events in Syria, while any efforts to manage the opposition could backfire. The administration appears to agree and is putting its faith in intensified sanctions and a multilateral approach to the crisis through the Friends of Syria group.

There is still plenty of anger within the U.S. administration at the Russian and Chinese rejection of a strong U.N. Security Council resolution on Syria, but Feltman said Thursday that Russia might yet be part of the solution in Syria through its influence with the regime.

Analysts say that the U.S. and Russian views of the situation in Syria are not dissimilar, even if their public stances are. Both stand to lose should the country descend into sectarian chaos or become an incubator for al Qaeda on the Mediterranean. If Russia perceives that Assad is incapable of rescuing the situation, it might look to a military takeover to preserve its influence in Syria and the access of its navy to Syrian ports. For the United States, given that sanctions are a long-term play and arming the rebels a double-edged sword, a transitional military council might in time become the least worst option. But peeling away senior commanders would be tough. Syria’s elite units – the 4th Division and Revolutionary Guard – are tightly tied in with the Assad dynasty. The Syrian army – unlike those in Egypt and Tunisia – has no recent history as an independent institution.

As for that tipping point, Feltman acknowledged Thursday: “I hope I didn’t make it sound like it was coming tomorrow. I wish it were.”

By Tim Lister, with reporting from Elise Labott