Violence across Syria on eve of constitution vote 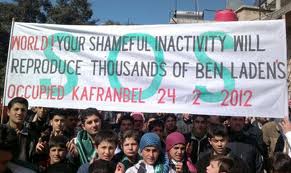 Syria defied international calls to halt attacks on rebel enclaves as at least 89 people were killed nationwide Saturday on the eve of a constitutional referendum that the opposition sees as a ploy by President Bashar Assad’s regime.

Assad presented the revised charter — which allows for at least a theoretical opening of the country’s political system — as an effort to placate critics and quell the 11-month uprising against his rule.

But the vote is unlikely to overshadow a new round of international condemnation and calls that Assad leave power.

The new charter would create a multiparty system in Syria, which has been ruled by the same family dynasty since Assad’s father Hafez seized power in a coup in 1963. Such change as unthinkable a year ago.

After 11 months of bloodshed, however, Assad’s opponents say the referendum and other promises of reform are not enough and have called for a boycott of the vote.

Assad was roundly criticized Friday at a major international conference on the Syrian crisis in Tunisia, where U.S., European and Arab officials began planning a civilian peacekeeping mission to deploy after the regime falls.

President Barack Obama said Friday of Assad’s rule: “It is time for that regime to move on.”

“That kind of logic unfortunately renders any kind of reform meaningless,” he said. “To fight on the one hand with your people and then to claim that there is reform is contradictory.”

Still, Assad enjoys substantial support in many parts of the country. Some have benefited from his policies, others fear chaos or sectarian civil war if he falls.

The insular nature of the regime makes the extent and character of that support hard to measure, and the regime has prevented most media from operating freely in the country during the uprising.

In the capital Damascus, where Assad retains support among religious minorities and the business class, many said they were eager to vote.

“This constitution is not for one faction against the other,” said Suhban Elewi, a 55-year-old businessman who trades in antiquities. “It is for the nation and for all the Syrian people.”

Elewi said he planned to vote yes, and dismissed opposition calls to boycott the vote.

“The country is going forward with them or without them,” he said.

Posters around town urged people to vote. “Don’t turn your back on voting,” one said.

Syrian Interior Minster Lt. Gen. Mohammed al-Shaar said more than 14,000 voting centers have been set up for more than 14 million eligible voters across the country.

But the suggestion of political reform led by Assad’s regime rang hollow in many parts of the country, where government security forces continued their deadly crackdown on rebels seeking to end Assad’s rule.

The violence could also prevent the vote taking place nationwide.

An activist in a neighborhood in the central city of Homs that government forces have besieged and shelled daily for one month laughed when asked about the vote.

“How can they ask us to talk about a new constitution when they are shelling our neighborhood?” said Abu Mohammed Ibrahim from the embattled neighborhood of Baba Amr via Skype. “They are hitting us with all types of weapons. What constitution? What referendum?”

The regime’s relentless assault on Homs, which has emerged as the heart of the anti-Assad revolt, entered its fourth week with government shelling killing at least 19 people Saturday.

A spokesman for the International Committee of the Red Cross said the group’s local chapter was not able to enter the area Saturday to evacuate wounded Syrians, two injured foreign journalists and the bodies of two others killed by government rockets this week.

Colvin’s mother, Rosemarie Colvin, told the AP that “Absolutely no decision there has been made” on burial or funeral arrangements. “We’re still hoping very, very strongly that they’ll bring the two of them out,” she said.

A team from the Syrian Red Crescent evacuated 27 people from the area Friday, seven of them wounded, but was not able to get out the journalists.

Spokesman Hicham Hassan said the group would continue negotiating with Syrian authorities and activists to get access to the area and that the Syrian Red Crescent carried out evacuations elsewhere in Syria, including in other neighborhoods of Homs.

Violence continued across the country.

The Britain-based Syrian Observatory for Human Rights said at least 89 people were killed, including 23 from the army and security forces, across the country. Nineteen of the dead were in Homs.

The dead included citizen journalist Anas al-Tarshi, who filmed attacks and people killed in Homs to post on activists websites. He was taking wounded people to a field hospital when a shell struck his car, the group said.

Also killed in Homs was Ahmed Swaidan, an ex-player for a local soccer club, who died when a mortar fell on his house.

The Syrian uprising began in March with mostly peaceful protests in a number of the country’s impoverished provinces. As security forces violently suppressed them, killing thousands, the protest grew and escalated into an increasingly armed insurrection.

The U.N. said last month that 5,400 people had been killed since the uprising’s start. Hundreds more have died since. Activists put the number at more than 7,300, but overall figures are impossible to confirm independently.