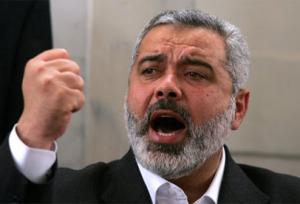 CAIRO – Gaza premier Ismail Haniya hailed on Friday the “heroic” Syrian struggle for democracy during a rally at Cairo’s Al-Azhar mosque, in a departure from the Islamists’ refusal to criticise Damascus.

“I salute all the people of the Arab Spring, or rather the Islamic Winter,” Haniya told several thousand cheering people who attended a rally in support of the Palestinians and Syrians.

“I salute the heroic Syrian people, who are striving for freedom, democracy and reform,” he added.

“No Iran, no Hezbollah. Syria is Islamic,” chanted the protesters, in an apparent reference to the Syrian regime’s Shiite Muslim supporters.

Until now, the Hamas political leadership has refused to criticize President Bashar Al-Assad’s crackdown on an 11-month long uprising, even when Assad’s forces targeted a Palestinian refugee camp.