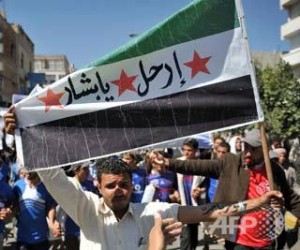 BEIRUT, Lebanon — Syria’s downward spiral into more hellish conflict in cities like Homs has provoked a new surge of outrage around the world, with Arab and many Western countries searching for new ways to support protesters and activist groups coming under the government’s increasingly lethal assault.

But as diplomats from about 80 countries converge on Tunisia on Friday in search of a strategy to provide aid to Syria’s beleaguered citizens, they will find their efforts compromised even before they begin by the lack of a cohesive opposition leadership.

Nearly a year after the uprising began, the opposition remains a fractious collection of political groups, longtime exiles, grass-roots organizers and armed militants, all deeply divided along ideological, ethnic or sectarian lines, and too disjointed to agree on even the rudiments of a strategy to topple President Bashar al-Assad’s government.

The need to build a united opposition will be the focus of intense discussions at what has been billed as the inaugural meeting of the Friends of Syria. Fostering some semblance of a unified protest movement, possibly under the umbrella of an exile alliance called the Syrian National Council, will be a theme hovering in the background.

The council’s internal divisions have kept Western and Arab governments from recognizing it as a kind of government in exile, and the Tunis summit meeting will probably not change that. Russia, Syria’s main international patron, is avoiding the meeting entirely.

The divisions and shortcomings within the council were fully on display last week when its 10-member executive committee met at the Four Seasons Hotel in Doha, Qatar — its soaring lobby bedecked with roses and other red flowers left over from Valentine’s Day.

The council has been slow on critical issues like recognizing the transformation of the Syrian uprising from a nonviolent movement to an armed insurrection, according to members, diplomats and other analysts.

Aside from representing only about 70 percent of a range of groups opposing Mr. Assad, the council has yet to seriously address melding itself with the increasingly independent internal alliances in Homs and other cities across Syria trapped in an uneven battle for survival, they said, warning that the council runs the risk of being supplanted.

“They were in a constant, ongoing struggle, which delayed anything productive and any real work that should be done for the revolution,” said Rima Fleihan, an activist who crawled through barbed wire fences to Jordan from Syria last September to escape arrest. She was representing Syria’s Local Coordination Committees, an alliance of grass-root activists, on the council until she quit in frustration this month.

“They fight more than they work,” Ms. Fleihan said. “People are asking why they have failed to achieve any international recognition, why no aid is reaching the people, why are we still being shelled?”

Even by comparison with Libya, where infighting among rival militias and the inability of the Transitional National Council to exert authority fully created turmoil after the successful uprising there, Syria’s opposition appears scattered.

Well before NATO intervened in Libya, groups hostile to Col. Muammar el-Qaddafi leveraged the huge chunk of eastern Libya they held around Benghazi into the attempt to claim the whole country. A unified focus on the rebellion submerged most overt political differences for a time.

The United States and other Western governments are also wary of the uncertain role of Islamists in Syria. The Muslim Brotherhood and other organized Islamist groups were more thoroughly suppressed in Syria than in Egypt, and their leaders are less well known. Some diplomats fear that Syrian Islamists could ride to power amid the turmoil, imposing an agenda that might clash with Western goals.

That may be one reason the United States is hoping the Syrian National Council can overcome its divisions and shortcomings. Secretary of State Hillary Rodham Clinton, in a press conference in London, moved the United States a step closer to recognizing the council.

“They will have a seat at the table as a representative of the Syrian people,” Mrs. Clinton said. “And we think it’s important to have Syrians represented. And the consensus opinion by the Arab League and all the others who are working and planning this conference is that the S.N.C. is a credible representative.”

Indeed, the men at the Four Seasons in Doha ranged from the various Islamist representatives with suits, ties and neatly trimmed beards to the one Christian on the executive committee, a longtime university professor in Belgium who wandered around in flip-flops.

The council members contend that progress has been made among a group of people who were virtual strangers when they first gathered in Istanbul in September, and that sniping about their unrepresentative nature is mostly a disinformation campaign by Damascus.

“This is a manufactured problem,” said Burhan Ghalioun, the council president, in a brief interview outside an executive committee meeting last week. “Some independent people don’t want to join the S.N.C., but there is no strong opposition power outside the national council.”

He said lack of money was the group’s most acute problem. Although the Qatari government picked up the bill for the Doha meeting and for frequent travel, council members said that no significant financial support from Arab or Western governments had materialized despite repeated promises, so they must rely on rich Syrian exiles. They hope Friday’s meeting in Tunis will begin to change that.

After communicating via Skype with activists in embattled cities like Homs, Hama and Idlib, council members admitted sheepishly that those activists just flung accusations at them, demanding to know why they seemed to swan from one luxury hotel to the next while no medical supplies or other aid flowed into Syria.

The bickering takes place in plain sight. “Is this any way to work?” yelled Haithem al-Maleh, an 81-year-old lawyer and war horse of the opposition movement, as he came barreling out of one Doha meeting, only to be corralled back in. “They are all stupid and silly, but what can I do?”

The 310-member council remains Balkanized among different factions; arguments unspool endlessly over which groups deserve how many seats. The mostly secular, liberal representatives and those from the Islamist factions harbor mutual suspicions.

No one from Syria’s ruling Alawite community, the small religious sect of Mr. Assad, sits on the executive committee, despite repeated attempts to woo a few prominent dissidents. The fight over Kurdish seats remains unsettled even though Massoud Barzani, a leading Kurd in neighboring Iraq, tried to mediate.

The council has also not reconciled with members of another opposition coalition, the Syrian National Coordination Committee, some of whom remain in Syria and who have generally taken a softer line about allowing Mr. Assad to shepherd a political transition.

“Time is running out for the Syrian opposition to establish its credibility and viability as an effective representative of the uprising,” said Steven Heydemann, who focuses on Middle East issues at the United States Institute of Peace, a policy research group financed partly by Congress.

Even the council’s diplomatic efforts remain troubled. The council has yet to appoint an official envoy in Washington, and jockeying over who should lobby the United Nations Security Council earlier this month was so intense, diplomats and analysts said, that the council sent an unwieldy delegation of some 14 members who continued arguing in New York over who would meet which ambassador.

The key issue the council is grappling with right now is how to coordinate an increasingly armed opposition. The council says it supports the defensive use of weapons.

But exiled Syrian Army officers who formed the Free Syrian Army, based in Turkey, have stayed aloof from the council, and even they do not really control the many local militias that adopt the army’s name alone.