by yalibnan
1912
The characterization often heard in the media of the Free Syrian Army as armed only with Kalashnikovs is not quite accurate, but it’s not far from the truth. The AK-47 is indeed the main weapon of FSA fighters.
Share: 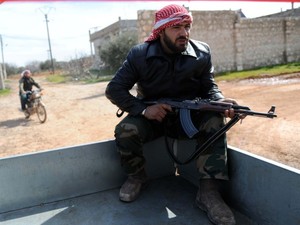 The mountains outside Antakya were wrapped in black clouds the day we crossed the border from Turkey into Syria. The smugglers said this was a good sign as the Syrian Army patrols don’t care for rain and mud, and would tend to stay in their huts, making our crossing safer. That was how it turned out. We pushed up the border fence and crawled through at around 9 p.m. There were horses heavily laden with contraband waiting for us just inside. We rode them across the mountains in the rain and arrived in Syria without being seen.

I had made contact with the smugglers in Antakya through Syrian opposition friends, some days previously. This is the only way into northern Syria for journalists at the present time. I wanted to head to Idleb Province, one of the centers of the insurgency against the Assad family dictatorship, and now one of the regime’s main targets. My purpose was to gain an impression of the Free Syrian Army, the increasingly important armed element in the revolt against Assad, from inside one of its heartland areas.

Antakya itself is buzzing with the semi-visible activities of both the Syrian regime and the opposition. The Free Syrian Army in Antakya is immensely security-conscious, particularly since the kidnapping and forced return to Syria of its founding member, Colonel Hussein Harmoush, last year. But the activities of the FSA are also severely restricted by the Turkish authorities, which watch it carefully, and whose gaze it seeks to avoid.

Antakya combines this sense of intrigue with the questionable charms of a mountain resort town in winter. Prior to crossing, I met with an FSA officer, Captain Ayham al-Kurdi, for an initial briefing.

I spoke with Kurdi in a rundown office in an apartment. A native of Hama, the 30-year-old former signals officer in a Syrian antiaircraft unit described to me how he came to the insurgency.

He was stationed near Daraa, a town close to the Jordanian border and the birthplace of the uprising, in mid-2011. He recalled his shock at witnessing the use of anti-aircraft munitions against civilian demonstrators in the area, as the Assad regime sought to murder the revolt in its cradle.

The use of these munitions was intended as a tool of terror. Their bullets kill people no more or less than regular ordnance. But from the regime’s point of view, they had the additional attraction of setting the bodies of those they hit on fire, turning the corpse into a symbol of deterrence to all who would challenge Assad’s rule. What they also did was to make Ayham al-Kurdi and others reassess their view of the government. Kurdi made his decision to desert, and help set up the beginnings of armed resistance to Assad.

But together with the Iranians, there were their Lebanese clients, Hezbollah, and beyond this Russia and China, looming and impervious. “A great Arabic and international movement” is what Captain Kurdi wants to counteract this. He is not confident that it will come.

Before I left his office for the border and the smugglers, as a way of farewell, Kurdi shared with me a curious rumor — if it is a rumor — that I would hear repeated a number of times in the days ahead. It concerned the possible use of chemical warfare by Assad against protesters. The claim was made regarding the Homs area, which even more so than Idleb, is currently the main focus of the regime’s violence. Homs city is being subjected to a merciless pounding by government artillery.

In Talbisa, next to Homs city, Kurdi told me, they sprayed pesticides on demonstrators from the air. The soldiers were equipped with a new type of gas mask. “Assad said before that we were germs,” he concluded, “now we’re insects. I guess that’s progress.” He wished me luck inside.

On the highway, once in Syria, we were vulnerable to any sudden spotchecks the army cared to place. But once we entered Idleb Province, the extent of the precarious gains made by rebel fighters in recent weeks became apparent. In towns like Binnish and Sarmin, the regime of Bashar al-Assad no longer exists, at least in visible form.

The roadblock that meets you at the entry to Binnish is manned by Free Syrian Army fighters. Armed opposition activists are everywhere. A makeshift clubhouse established by Abu Steif, the big man in the opposition in this backwater town, is buzzing with armed young men going in and out until the early hours of the morning. The flag of the Syrian revolution, which is the flag of the Syrian republic before the Baath party took control in 1963, flies above the main square.

The limitations of the revolt are also immediately apparent from a perusal of the armory assembled by the Free Army fighters in their Binnish headquarters. The characterization often heard in the media of the FSA as armed only with Kalashnikovs is not quite accurate, but it’s not far from the truth. The AK-47 is indeed the main weapon of FSA fighters. In addition, I saw RPG-7s, heavy machine guns, and a mortar. Newly arrived body armor, smuggled over the mountains, was stacked up in boxes. There seemed to be no sign of first-aid kits, though, and little indication of any sophisticated communications equipment.

The weapons were the subject of much discussion, and discussion is what the Free Army members in Binnish do a lot of, in their clubhouse, drinking endless quantities of sweet tea and smoking.

The RPG-7, in particular, was an object of enthusiasm. I heard Abdo, a fighter of the FSA and a former Syrian tank corpsman, extolling its virtues to the heavily built, black-bearded Abu Steif on that first evening. “At 300 yards, Abu Steif, at 300 yards, and it can stop a tank. It can take a house down, too. You’ll see it when the time comes.” Abu Steif, a ruminative figure, a prominent local businessman before the revolt, reflected on this information before nodding and concluding, “Praise God.” Assad’s army last entered the town in force in October. No one thinks they won’t be back.

The fighters in Binnish are a mixed bunch. Many are army deserters, with harrowing tales similar to Ayham al-Kurdi’s. The names of the places differ. The details are largely the same: orders to shoot at civilians, a growing realization of having been lied to, and then the decision to escape. The defections are recalled in graphic detail. Sometimes they involve the deaths of friends who sought also to desert, sometimes the turning of guns on fellow Syrian soldiers or officers.

But there is another type of fighter in the ranks of the armed opposition in the town. On the first evening, away from the main opposition center, I met a group of FSA members returning from an attack on an army checkpoint outside Idleb city. Among them were representatives of a type of man immediately familiar to all observers of early 21st-century Middle East politics. A type of man very calm, often smiling, with a sort of serenity about him. Bearded, invoking the authority of holy text, though rarely in a histrionic way. Salafi Islamist fighters are prominent among the FSA men in Binnish. They tended to keep away from Abu Steif’s clubhouse and to have their own gatherings elsewhere. They were local men, though, not foreigners.

I interviewed one of the Salafis shortly after they had returned from the attack on the checkpoint. He was in his mid-30s, black-bearded, and with the attitude typical of FSA fighters, a gloomy assessment of the balance of forces combined with a kind of generalized optimism. “We have no support from any country, and we receive no weapons from anyone,” he told me. “The regime, meanwhile, has Iran, Hezbollah, Russia, and China.” How long until Assad is destroyed? I asked. “I give it,” he said, in the manner of a physician revealing a prognosis, “roughly a month.”

The activists in Idleb Province are keen to reassure you that the regime really has gone, without a trace, from the liberated zones. The reality is more complex. The creation of the free zones in Idleb, Homs Province, and elsewhere is the most significant achievement to date of the Syrian revolution. The Assad regime, it should be remembered, was until recently a synonym for the airless, locked-down Arab nationalist police state. In Idleb Province now, there is some room to breathe.

And yet, of course, the regime is still there. Its tanks and armored vehicles are deployed some distance away, in the surrounding fields. But the unseen mechanisms of the dictatorship are present far beyond the FSA roadblock meant to keep out intruders.

Each Friday, large demonstrations take place across Syria, under a single slogan chosen by the opposition. On the Friday I was in Binnish, the designated slogan was “Russia is killing us.” A British Sky TV crew had entered the town, and was doing a live broadcast from a rooftop next to the rally. All had been peaceful. But as the cameras began to roll, in the area behind them, a large brawl unaccountably erupted. Within seconds, the Sky reporter’s jaunty copy about the revolution in Idleb Province was being recited, absurdly, with a mass fistfight going on behind it.

Opposition activists stepped in, and to the fury of the crew, stopped the live broadcast. To the practiced eye, what had taken place was very apparent. This was a provocation straight out of the dog-eared East German playbook of the Baath regime. Primitive and lowtech, it may have been. But it succeeded in disrupting the only piece of live coverage coming out of Idleb Province that day and served notice that whatever flag flew above the town square, the Assad regime had not entirely left. It turned out that some members of an unruly local clan had been paid to start the fight.

That evening, Abu Steif and his activists began preparing a list of 200 families in the town who would send representatives to a new “security committee” to be formed in Binnish. It is a beginning.

Getting from Binnish to neighboring Sarmin requires venturing back onto the main highway to Damascus. We managed this without incident. In Sarmin, the armed element looks better organized, more professional than in Binnish. There is talk of around a thousand armed men in the town.

Photo: A militant with the Free Syrian Army sits at the back of pick-up truck in the northwestern city of Idlib, on Feb. 21, 2012. Syrian forces blitzed opposition hubs and opened fire to disperse daring protesters in the capital, monitors said, as the country devolves further into violence.