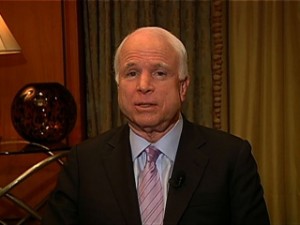 In an interview to be broadcast Monday evening, McCain, the top Republican on the Senate Armed Services Committee, said Iranian involvement shouldn’t be a reason preventing the United States from providing support to the rebels in their nearly-yearlong uprising.

“The Iranians are already there,” said McCain. “They’re already there. All reports confirm that. They’re already supplying arms and equipment to Bashar Assad, as are the Russians supplying arms, so right now it’s an asymmetric situation with Bashar Assad receiving equipment and actual physical help from Iran, Russia – and the Syrian rebels not receiving equal assistance, certainly not very much.”