Two Iranian warships on their way to Syrian coast 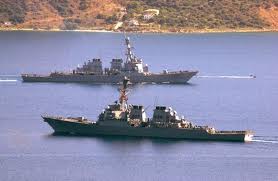 Two Iranian warships, a destroyer and a supply ship, are on their way to the Syrian coast.

The two ships sailed through the Suez Canal, following permission from the Egyptian armed forces which control the waters between the Red Sea and the Mediterranean.

The move is a new show of support for the regime of Syrian President Bashar al-Assad and was called “a provocation” by Israel. Iran and Syria signed an agreement to carry out joint naval training operations last year. . .