The West must take stronger action to help the Syrian opposition

by yalibnan
480
IT’S BEEN MORE than six months since President Obama called for the end of the Syrian regime of Bashar al-Assad. Yet as Mr. Assad’s forces escalated their assaults on Syrian cities inflicting scores of deaths every day, his rule appeared far from finished.
Share: 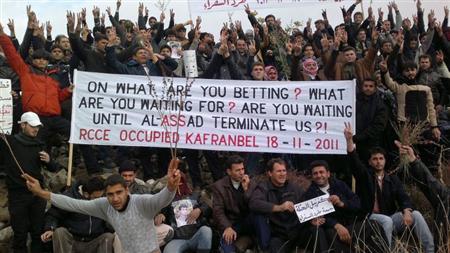 IT’S BEEN MORE than six months since President Obama called for the end of the Syrian regime of Bashar al-Assad. Yet as Mr. Assad’s forces escalated their assaults on Syrian cities last week, inflicting scores of deaths every day, his rule appeared far from finished. On the contrary, there seems every chance that the dictator could go on slaughtering Syrians for months or even years — and maybe prevail.

This appalling prospect has prompted an anguished debate about what can be done to help Syrians — particularly the civilians under assault from tanks and artillery who have little or no access to humanitarian assistance. The modestly good news is that there are some measures that the Friends of Syria — a group of Arab, Islamic and Western states to be convened Feb. 24 in Tunis — can agree on. The bad news is that no one believes they will stop Mr. Assad.

What are the consensus steps? First would be an effort to help the Syrian opposition better organize itself and create plausible plans for a post-Assad order. At the moment, the Syrian National Council, based in exile, is not representative enough of the country’s minority communities — including the ruling Alawites — and it has an uneasy relationship with the Free Syrian Army, which was founded in refu­gee camps in Turkey. Both organizations have, at best, tenuous ties with the popular committees and groups of army defectors who are leading the resistance in Syria.

The council must be pushed to become more inclusive and to prepare a plausible plan for a democratic transition that protects Syria’s minorities, including the Alawites. Its reward would be recognition by the Arab League and Western governments, and funding for any humanitarian relief it could organize. Meanwhile, the Friends group could explore other forms of humanitarian aid, beginning with help for groups that are already working in Syria.

On Friday, Secretary of State Hillary Rodham Clinton was honest enough to acknowledge the inadequacy of this response. “This takes a large dose of humility to say we don’t have all the answers,” she said. The bigger ideas being discussed among governments, including “humanitarian corridors” to besieged areas, or safe zones near Turkey’s borders, would require United Nations authorization and a military force to back them up. Such initiatives are worthy of support, but Russia will likely continue to block U.N. action, while both the Obama administration and NATO have repeatedly made clear they have no interest in military intervention.

So how to stop the massacres? The most available and workable solution is tactical and materiel support for the anti-regime forces, delivered through neighbors such as Turkey or the Persian Gulf states. Opponents say that would increase the violence, but violence in Syria will continue to escalate as long as the regime believes it can survive by force. Others worry that radicals among the opposition will be empowered. But what will strengthen extremists the most is the failure of democratic nations to act and the entry of groups such as al-Qaeda into the vacuum.

The assault on Syria’s people will end only when the regime’s forces are forced to conclude that they cannot win — or when they succeed in their savage campaign of pacification. If President Obama is to uphold his words, U.S. policy must be based on that reality.