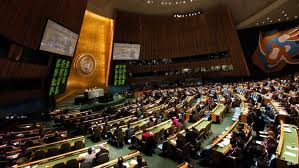 The UN General Assembly voted 137 to 12 on Thursday to approve a resolution calling for an immediate halt to Syrian President Bashar Al-Assad’s violent crackdown on dissent.

China, Russia and Iran were among the nations that opposed the text put forward by Egypt and other Arab states that condemned “widespread and systematic violations of human rights” in Syria.

Seventeen UN member states abstained from voting on the resolution, which came just days after Russia and China joined forces to use their veto power to derail a similar text in the UN Security Council.

Egyptian ambassador Maged Abdelaziz said there had been an “unacceptable escalation” of violence in Syria. “We demand that the Syrian government heed the demands of the Arab and Syrian people and staunch the bloodshed,” he added.

But Syria’s ambassador to the United Nations, Bashar Jaafari, declared just before Thursday’s vote that the resolution amounted to unwarranted intervention in his country’s internal affairs.

“Some of the co-sponsors would like to settle accounts with Syria,” he told the General Assembly, alleging that the resolution was motivated by the wider and long-running Middle East conflict.

To adopt the resolution, 10 days before a referendum on a new constitution for “a modern democratic Syrian state,” he said, “will only lead to a tightening of the crisis and more tension in the region.”

The United Nations, Jaafari added, was in danger of being used by “some member states” as a way to provide cover for “armed terrorist groups.”

Russia’s representative said his nation voted against the resolution as it did not incorporate amendments that it had proposed. His Chinese colleague said the resolution amounted to undue interference in the affairs of a sovereign state.