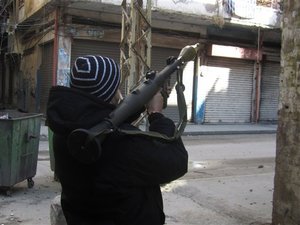 TRIPOLI, Lebanon—Syria’s civil conflict is rapidly expanding into a regional proxy battle that threatens to cleave neighboring countries, including Lebanon and Iraq, as their populations harden along sectarian lines.

Syria’s struggle is reopening sectarian fault lines in places like Tripoli, a city in northern Lebanon where tensions have long simmered. The area’s minority Alawite residents belong to the same Muslim offshoot sect as Syrian President Bashar al-Assad, and have long supported the family regime. Meanwhile, Sunni residents in recent months have provided shelter, hospitals and a base for arms trade to Syrian rebels, all sides widely acknowledge.

The rancor broke into the open last weekend, resulting in two days of gunbattles that left three people dead. The fighting was centered on Tripoli’s Syria Street—a demarcation line between local Sunni and Alawite neighborhoods that extends, metaphorically, to the top levels of Lebanon’s government and across the Middle East.

The United Nations General Assembly overwhelmingly passed a nonbinding resolution Thursday that condemned “widespread and systematic violation of human rights” in Syria and calls on Mr. Assad to step aside. “Change must now come,” said Susan Rice, the U.S. ambassador to the U.N. “Bashar al-Assad has never been more isolated.”

Russia was among 12 of the 193 member countries to vote against the resolution, as was China, which said Thursday it would send its foreign minister ty Syria for talks on Friday and Saturday. Venezuela, meanwhile, appeared to be mounting its own support of Mr. Assad, dispatching an oil-products tanker to Syria, according to shipping records.

Fighting in Syria continued Thursday, with government forces attacking the southern city of Deraa and pounding Homs for the second week, activists said. The Local Coordination Committees, an activist network, put the total death toll across Syria on Thursday at 63.

Even as international fears grow of a Syrian civil war, neighbors are choosing sides. Iran has pledged its support to Mr. Assad, and Western officials have accused Tehran of aiding Damascus in its crackdown on dissent.

Many of the region’s Sunnis are arrayed against Syria’s leader, including the kingdoms of the Gulf, backed by the U.S. and Europe, as well as a longtime nemesis of these powers. On Thursday, U.S. intelligence officials said they now believe al Qaeda operatives are joining the battle against the Assad regime.

Iraqis, meanwhile, have allegedly been arming both sides of the Syrian conflict. Sunni leaders in Iraq have claimed to be arming the opposition to Mr. Assad. Syrian opposition members have accused Iraq’s Shiite Prime Minister Nouri al-Maliki of aiding Mr. Assad by turning a blind eye to the passage of Iraqi Shiite militiamen, as well as Iranian fighters and weapons transiting to Syria through Iraq, to assist Mr. Assad in his crackdown. Iraqi officials deny this.

These battle lines run through northern Lebanon, which shares a porous border with Syria. In the city of Tripoli, many Lebanese Alawites, a group considered a Shiite-offshoot sect, are allied with Hezbollah, the Shiite militant and political group that holds heavy sway in Lebanon’s government.

Sunnis in Tripoli have mobilized to shelter Syrian refugees and have helped organize private hospital facilities for the wounded Syrian opposition fighters and activists, say residents and Syrian refugees.

Farther north, close to the border with Syria, Syrian Army defectors and refugees have carved out a swath of land in Wadi Khaled, across the border from the besieged Syrian city of Homs, according to residents. The vast valley region has become an operational base for Syrian rebel fighters and weapons smugglers, these residents say. Lebanon is one of the main sources for arms for Syria’s rebels, according to Western officials and opposition activists.

The United Nations Refugee Agency says 6,133 Syrians are registered in north Lebanon. Syrian activists say the actual number at is least twice that and growing.

Some Lebanese officials fear the area could develop into a lawless enclave outside the central government’s control, similar to the Palestinian refugee camps that sprang up in the 1970s and 1980s. Back then, the influx of Palestinians, including scores of armed militants using Lebanon as a base for attacks against Israel, upended the country’s delicate demographic balance, provoked a civil war and dragged Lebanon into war with Israel.

The latest violence started when residents in the Sunni area unfurled a banner from a building that read “Assad the Butcher,” say some of the people involved in the clashes.

On Feb. 10, deadly gunbattles between these pro- and anti-Assad factions prompted the Lebanese army to intervene. The army pulled in to the streets of Tripoli to guard a cease-fire. A week earlier, it had deployed to Syria’s northeastern border at Wadi Khaled, in what appeared to be the first such mobilization there in decades.

Residents say the moves are the manifestation of a larger struggle between factions of their government, which rules Lebanon in an increasingly shaky power-sharing agreement. Under the deal, the country’s Shiite-Hezbollah-led alliance influences intelligence services as well as the military. Its rivals, a Sunni Muslim and Christian alliance, control internal security.

Officially, Lebanon’s government has held to neutrality in the Syria conflict. But different government institutions, residents say, are weighing in on respective sides.

In recent weeks, at least 12 wounded Syrian opposition activists bound for hospitals in Lebanon have been nabbed en route by military intelligence or Hezbollah members, said Abu Yasser, the Syrian medical relief worker in Lebanon, and others in his Syrian opposition-run aid commission.

Lebanon’s interior ministry, which is dominated by Hezbollah’s rivals, publicly accused the Syrian embassy in Beirut of kidnapping three Syrian opposition activists in Lebanon last year, a charge the embassy denied. The clashes and protests that resulted forced the embassy late last year to relocate outside of Beirut.

Hezbollah officials have been restricted in speaking to the media, except through formal published statements. It didn’t comment on the alleged kidnappings.

Hezbollah leader Sayyed Hassan Nasrallah on Thursday accused his political rivals of funding and arming Syria’s opposition, escalating the conflict there while “plunging Lebanon into war.”

Lebanon’s dueling camps have also sparred over the deployment of the army on Feb. 4 along the northern border.

The government said the border deployment was to monitor the security situation and reassure residents, Lebanon’s state-run news agency reported. But Lebanon’s pro-Syrian opposition factions suspected the army’s real motives were different, as reports emerged that the deployment was restricting the movement of refugees, aid, fighters and the wounded, across the border.

They said the military deployed only after Syria’s ambassador met with Lebanese officials to relay Syrian concerns that border smuggling was helping arm militant groups.

“We objected immediately, saying: Are you spreading out on the border to protect Lebanon or in response to the demands of Syrian regime?” said Khaled Daher, a parliamentarian with the anti-Hezbollah Future Movement.