Chinese envoy heads to Syria after U.N. vote against Assad 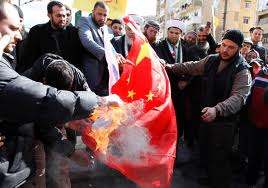 A senior Chinese official was due to visit Damascus on Friday in a show of support for Bashar-al Assad after the U.N. General Assembly told the Syrian president to halt a violent crackdown and surrender power.

Assad showed no sign of easing his campaign to stamp out the 11-month uprising against his rule. His forces on Friday resumed pummeling opposition strongholds in the city of Homs, which has now been under fire for two weeks.

“They are mostly firing rockets that directly fall onto buildings and mortar rounds now and then. Only Karama street now separates Baba Amro from the army at Inshaat. We will see if they advance further,” activist Aba Iyad said by satellite phone form Baba Amro.

At the Zein al-Abideen mosque in Maidan in central Damascus YouTube footage provided by activist showed about 2,000 worshippers inside chanting and clapping “Homs we are you till death…the people want the downfall of the regime.”

It was not possible to verify the origin of the video and the Syrian authorities tightly restrict media access to the country.

The U.N. assembly vote in New York on Thursday showed Assad had few foreign friends left – 137 states voted in favour, 12 voted against and 17 abstained on a resolution endorsing an Arab League plan that calls for Assad to step down.

Russia and China voted against, after vetoing a similar text in the U.N. Security Council on February 4.

The assembly vote, unlike Council resolutions, has no legal force but it increased Assad’s isolation and reflected global revulsion at the ferocity of the crackdown in which government security forces have killed several thousand civilians.

“Today the U.N. General Assembly sent a clear message to the people of Syria – the world is with you,” U.S. Ambassador Susan Rice said in a statement.

Beirut-based political commentator Rami Khouri told Reuters that the vote was important even though it was symbolic.

“There’s overwhelming global support for the opposition. It keeps the pressure on and the opposition can say they have global legitimacy. I think his days are numbered. But we still don’t know how long he can hold on,” Khouri said.

Assad, who succeeded his late father Hafez in 2000 after he had ruled for 30 years, still has crucial support on the international stage from Russia and China as well as backing from Iran, itself at odds with the West.

Beijing and Moscow say they oppose the idea of foreign intervention in sovereign states and Russia has long-standing strategic interests in Syria, including a naval base.

Chinese Vice Foreign Minister Zhai Jun, before leaving for his visit to Damascus, said: “China does not approve of the use of force to interfere in Syria or the forceful pushing of a so-called regime change.”

China also believed the threat of sanctions would not help resolve the issue, he said. It was not known if he had any particular message for Assad or if he would try to persuade him to call off the military operation.

The uprising started out as peaceful civilian protests across the country last March but now includes a parallel armed struggle spearheaded by the Free Syria Army.

The rebel fighters have yet to do much more than stage hit-and-run attacks and skirmishes. But Western and Arab powers fear the crisis is sliding into a civil war which could inflame the region’s patchwork of religious, ethnic and political rivalries.

Assad portrays the opposition as foreign-backed terrorists and has promised reforms, while rejecting the idea of surrendering power.

On Wednesday, he announced a referendum on a draft constitution on February 26 that would formally end his Baath Party’s monopoly on power, followed by a multi-party parliamentary election.

Nor was it clear how a vote could be held in country with a repressed opposition and a state of open revolt.

Ban later had talks with French Foreign Minister Alain Juppe and they agreed that the priorities were to stop the violence and provide humanitarian aid to suffering civilians access.

Juppe said agreement at the Security Council was possible with Russia to halt the bloodshed.

“We can possibly reach a compromise on a short-term objective which is to end the massacres,” he said. “We must do everything so that the violence ends and that a lot of humanitarian aid is given to the Syrian people.”

But Russian Foreign Minister Sergei Lavrov was non-committal after meeting Juppe in Vienna. “I cannot express my opinion on the French proposal because I received none,” he said.

On the ground, the activist Aba Iyad said government forces made several incursions into Homs’ Inshaat district in the last few weeks only to withdraw by nightfall to avoid attacks by rebel fighters.

In Idlib, capital of the rugged northwestern province on the border with Turkey, two residents told Reuters that tanks ringed the city at dawn. Residents anticipated an assault.

“At every entrance of Idlib several tanks deployed along with pick-up trucks used for troop transport,” said one resident, who gave his name as Fouad.

In Deraa, a city on the Jordanian border where the revolt erupted nearly a year ago, the sound of explosions and machinegun fire echoed through districts under attack by government troops, residents said.

The Syrian Observatory for Human Rights said one person was shot dead at a checkpoint on Friday in an area of Deir al-Zor, in the northeast, where clashes between the rebels and state forces have been going on since Thursday night.

The Syrian military has also opened a new offensive in Hama, a city with a bloody history of resistance to Assad’s late father. Activists said at least 14 people were killed in a bombardment of the nearby town of Kfar Nubouzeh on Thursday.