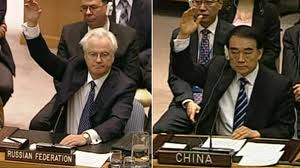 China disapproves of armed intervention or regime change in Syria, a minister said on Thursday before leaving on the first official trip to Syria since Beijing blocked a U.N. resolution calling for President Bashar al-Assad to step down.

The West and many in the Arab world scolded China for its veto after months of bloodshed between Syrian forces and protesters demanding reform. Beijing said it was simply trying to prevent more violence and was acting in accordance with the U.N. charter.

It later sent two junior envoys to the Middle East to explain its position.

“(China) does not approve of the use of force to interfere in Syria or the forceful pushing of a so-called regime change,” the Foreign Ministry cited Vice Foreign Minister Zhai Jun as saying on its website (www.fmprc.gov.cn).

Zhai, who will travel to Syria on Friday and Saturday, said China believed that “sanctions or the threat of sanctions are not conducive to the appropriate resolution of this issue.”

The Foreign Ministry did not give details of Zhai’s agenda or who he would meet. Last week, Zhai met a Syrian opposition delegation in Beijing.

The trip, a step up in China’s efforts to mediate the crisis, comes days after it warned that Western powers should tread carefully at the United Nations in dealing with Syria, or risk worsening violence.

Chinese Premier Wen Jiabao vowed this week to work through the United Nations to seek an end to the strife.

Zhai’s trip follows one by Russian Foreign Minister Sergei Lavrov, who days after the veto travelled to Damascus as the United States shut its embassy and European countries recalled their envoys.

“We urge the Syrian government and all of its political parties to immediately and fully end all acts of violence and quickly restore stability and normal social order,” Zhai said.

“We call on the government of Syria to seriously heed the people’s legitimate desire for reform and development and call on the various political factions to express their political aspirations non-violently under the rule of law,” he added.

China wants the Syria crisis solved within the framework of the Arab League, he added.

Imad Mustafa, Syria’s former ambassador to the United States, now ambassador to China, said in an interview with China’s Xinhua news agency this week that any Chinese envoy would be warmly welcomed.

“Last week, Russia’s foreign minister visited Syria and in Damascus about 2 million people holding Russian flags turned out to greet him and say ‘thank you’. If Chinese officials also pay a visit there, there would be even more Syrian people there to greet them,” he said.

China’s ruling Communist Party mouthpiece, the People’s Daily, said in a commentary foreign meddling in Syria risked stirring up a hornets’ nest of instability in the Middle East, which could shock markets and derail a weak global economy.

“The political ecology in the Middle East is extremely frail, a tangled mess of thousands of years of ethnic and religious conflict,” the People’s Daily said on Thursday.

World powers must realize this and handle bloodshed in Syria and Middle East tension with a sense of realism, it said.

The author used the pen name “Zhong Sheng,” which can mean “voice of China” and is often used to give government positions on foreign policy.

The People’s Daily said the United States wanted to establish a friendly government in Syria to counter the influence of its “old enemy” in the region, Iran.

“Once Syria sets up a pro-Western regime, Iran will lose important backing,” it said.