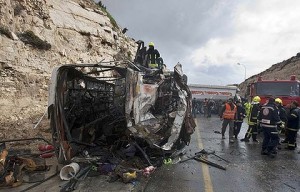 At least eight Palestinian children were killed on Thursday when an Israeli truck hit a Palestinian school bus on a road in the West Bank, Israeli police said.

A spokesman for Israel’s emergency services put the injury toll at up to 40, and said the wounded had been taken to hospitals in both Israel and the West Bank city of Ramallah.

“There are between eight and 10 Palestinian children dead, aged between 10 and 16, and more than 30 injured who were taken to various hospitals in Ramallah and Mt Scopus,” police spokeswoman Luba Samri told AFP.