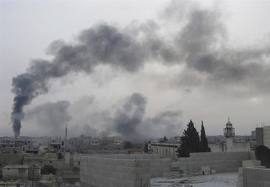 The sound of explosions and machinegun fire echoed through the city’s al-Balad, al-Mahatta and al-Sad districts as government troops attacked rebels, who responded by firing at army roadblocks and buildings housing security police and militiamen, they said. Deraa lies on the border with Jordan.

“The army bombardment started around dawn and after that exchanges of fire occurred. We have been hearing of a military build-up around Deraa for two weeks,” Hussam Izzedine, a member of the Syrian human rights organization Swasiah, told Reuters from Deraa.

“Deraa has been regaining its role in the uprising. Demonstrations have resumed and the Free Syrian Army has been providing security for protests in some parts of the city,” he added.

Another activist, who decline to be named, said two Free Syrian Army members had been wounded, and added that the attack appeared to be focused on parts of the city that had fallen under Free Syrian Army control.

An army offensive last April put down large demonstrations in Deraa, which had been provoked by the arrest of several women activists and the detention of schoolboys who had written freedom slogans on walls, inspired by Arab Spring revolts in other countries.