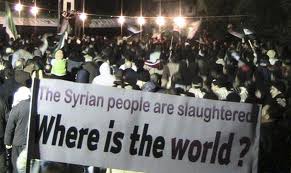 France’s latest call for creating “humanitarian corridors” in Syria is unlikely to win support at the United Nations because it would require military intervention of the kind that has been all but ruled out by western countries and is opposed in principle by Russia and China.

Alain Juppé, the French foreign minister, said on Wednesday that the issue was being discussed as part of an effort to persuade the Russians not to veto a new UN resolution on Syria, as they did, along with China, 10 days ago.

Western and Arab diplomacy was thrown into disarray by that move. Details of an Arab plan for a “Syrian-led” political transition to replace President Bashar al-Assad and a joint Arab League-UN peacekeeping force remain unclear.

It was last November when Juppé first aired a plan for humanitarian corridors either with Syrian approval or with an international mandate for shipping in food and medicine. The corridors would run from the borders of Turkey and Lebanon to the Mediterranean coast or an airport.

British officials insisted on Wednesday that it would be impossible to set up a safe zone or corridor without military intervention. That in turn would require a resolution under chapter seven of the UN charter, for which, unlike in Libya last year, there was neither western appetite nor Russian and Chinese acquiescence.

Juppé is to meet his Russian counterpart, Sergei Lavrov, on Thursday. Lavrov said after meeting the Dutch foreign minister, Uri Rosenthal, on Wednesday that Russia would not support any UN resolution “that could legitimise regime change”.

David Cameron and Nicolas Sarkozy are to discuss the Syrian crisis in Paris on Friday. Humanitarian aid will be on the agenda, diplomats said, but there are no plans to discuss establishing humanitarian corridors or safe zones on any of the country’s borders. Another highly sensitive question is that of possible assistance to the rebels of the Free Syrian Army.

On the diplomatic front, the next big event is the founding meeting of a new Friends of Syria group in Tunisia on 24 February, with efforts focusing on persuading the divided Syrian opposition to present a more united front and send out clearer messages about the post-Assad future.

William Hague, Britain’s foreign secretary, told MPs recently that he did not want to be in the position of making “false assurances” about Syria.

The Syrian government, meanwhile, has rebuffed allegations made by the UN high commissioner for human rights, Navi Pillay, accusing her on Wednesday of “turning a blind eye to facts” and “ignoring the terrorist crimes committed by armed groups”. Pillay has said she urged the UN security council to refer Syria to the international criminal court.