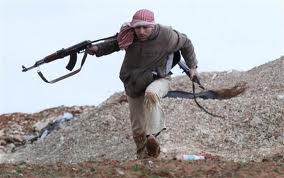 Fears of an as-yet-undefined Middle Eastern war are darkening the horizons of a Middle East that only a year ago was celebrating the fall of dictators, the ascent of people power and the promise of a new era of democracy.

Iranian threats to mine the Strait of Hormuz raise the specter of conflict between the United States and Iran in the Persian Gulf. Warnings from Israel that it may strike Iran’s nuclear facilities open up the possibility of a region-wide conflict.

Most worryingly of all, as shells rain down on the Syrian city of Homs and TV screens across the region replay gory scenes of casualties captured on videos posted on YouTube, there is now little doubt that Syria is in the early stages of a civil war, one whose potentially profound ramifications provoke jitters far beyond its borders.

Although a wider war is by no means inevitable, 2012 is already proving a dark sequel to the hope and possibility of 2011, as the demands of ordinary people for greater freedoms collide with the competing agendas of big powers in the region’s most volatile heart.

“There are two different trajectories in the Middle East,” said Paul Salem, director of the Carnegie Middle East Center in Beirut. While “North Africa is moving toward more democracy,” he said, the Levant region — including Israel, Lebanon, Syria and Iraq — is “moving toward confrontation and sectarian conflict. It is a much darker, gloomier trajectory.”

Despite chaos in Cairo and confusion in Tripoli, the three North African nations of Tunisia, Egypt and Libya are getting on with the task, however messily, of building new democracies after a year in which authoritarian leaders in each country were deposed.

But in the Arab heartlands stretched between Israel and Iran, the awakening of democratic aspirations has stirred also ancient rivalries and more recent grudges across a network of crisscrossing fault lines, any one of which could crack and trigger all the rest.

“It feels like anywhere could explode, without knowing why, at any time,” said Umm Haya, a Syrian living in Baghdad, reflecting the widespread sense of unease among many living beyond Syria’s borders. “The whole region is inflammable.”

At the center of it all is Syria, whose nearly year-long revolt began as an overwhelmingly peaceful popular uprising against the rule of President Bashar al-Assad but now is being reshaped into a far wider struggle for influence.

Unlike Libya, Tunisia and Egypt, whose relatively limited regional reach ensured their revolts were contained within their borders, Syria lies at the nexus of a web of strategic alliances, geopolitical interests and religious jealousies that would be upended were the regime there to fall.

“Libya imploded. Syria will explode,” said a diplomat from a non-Western country interviewed in Damascus. “And it will explode across the whole region.”

It is not only that Syria’s religious and ethnic makeup complicates an essentially grass-roots uprising against decades of tyranny. Assad’s minority Alawite clan, an offshoot of Shiite Islam, controls most key positions in the security forces spearheading the effort to suppress the unrest, lending a sectarian dimension to a revolt dominated by the country’s Sunni majority.

Assad’s own record, and that of his father before him, as a champion of anti-Western causes, his alliances with groups such as Hezbollah and Hamas, and above all his close relationship with Iran also puts his regime on the frontline of a far broader struggle for influence.

“Regime change in Syria would have an impact on the entire region, because Syria has geopolitical importance for Palestine, Lebanon, Iraq, Jordan, everywhere. So every country has its own interest in what is happening in Syria,” said Iraq’s Foreign Minister Hoshyar Zebari, who is striving to balance Iraq’s own delicate sectarian complexity with the unfolding events in neighboring Syria.

That the Syrian crisis is escalating just as America’s influence in the region is waning only further complicates the picture. The withdrawal of U.S. troops from Iraq in December and the advent of election-year constraints have sent a clear signal to the region that the United States is unlikely to intervene.

“The American presence was a form of deterrence,” Zebari said. “Now people feel there is some kind of vacuum, and they are competing to fill it.”

Among those powers is Russia, which thinks it was tricked by the West in Libya, and has now stepped up forcefully in defense of Assad, letting it be known that it will not stand by while a U.S.-backed alliance works to unseat its chief Mideast ally.

The Russian and Chinese vetoes of a U.N. resolution condemning Syria, and Russia’s energetic attempts to broker its own outcome to the Syria crisis, evoke Cold War-era memories of an earlier struggle for control of the region that had appeared to end with the collapse of the Soviet Union and the U.S.-led rescue of Kuwait in 1991.

Iran vs. the West

Underpinning the struggle for Syria, however, is a far older battle for supremacy between Iran and the West, Sunnis and Shiites, Arabs and Persians, which appeared to have been suppressed by the popular clamor for change that erupted across the Arab world last year but which now has resurfaced as a key dynamic driving the competition for power.

Syria’s three-decade-old strategic alliance with the Islamic Republic of Iran places it firmly at the heart of what Jordan’s King Abdullah dubbed in 2006 the Shiite crescent, an arc of territory stretching from Tehran to Beirut, through Baghdad and Damascus, that is governed by Shiite-affiliated leaders sympathetic to Iran.

If Syria were to be ruled by its Sunni majority, Damascus would anchor what some are already calling a Sunni crescent, stretching from Saudi Arabia to Turkey and severing Iran’s lifeline to the Mediterranean.

For the Sunni countries of the Gulf, led by Saudi Arabia, the unrest in Syria presents a fresh opportunity to push back against Iranian influence, which expanded dramatically into Lebanon and Iraq in the wake of the 2003 invasion, analysts say.

Though there is no evidence yet to support Syrian government claims that Qatar and Saudi Arabia have been arming the Syrian opposition, that could well change now that concerted international action to resolve the Syria crisis seems unlikely, said Emile Hokayem of the International Institute for Strategic Studies in Bahrain.

With Russia already providing arms to the government and Iran offering technical assistance and military advice, according to U.S. officials, the stage is set for Syria to serve as the venue for a messy proxy war that could spill into Lebanon, Iraq and perhaps beyond.

Often forgotten in this maelstrom of competing agendas are those who initiated the unrest, the ordinary people who summoned the courage to take to the streets to call for greater freedoms and better governance.

As Homs, the epicenter of the Syrian revolt, buckles under the fury of a week-long artillery bombardment, desperate residents say they are beginning to despair.

“We can’t succeed without international support,” said Omar Shakir, an activist in the besieged Bab Amr district of the city. “I cannot believe the world is watching in silence what is happening here.”

Yet although more bloodshed almost certainly lies ahead, it is still not too late to discount the prospect of a brighter future, Hokayem said.

“Things will get gloomier, but at the same time these uprisings and revolutions are processes that could take years,” he said. “The geopolitics are tainting it, the sectarianism is tainting it . . . but there is still something good and true about the original demands of all these people across the region.”