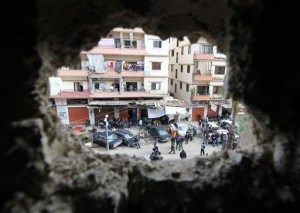 The tensions between the two neighborhoods were building for days in the northern Lebanese city of Tripoli. On one side live Sunni Muslims who hate the Syrian regime. On the hill above are members of the Alawite sect, Bashar Assad’s strongest backers.

Overnight, the tempers exploded. For hours, gunmen in the two districts traded automatic weapons fire and volleys of rocket-propelled grenades across the avenue that divides them, ironically named Syria Street.

By the time a shaky truce was reached Saturday, two people were dead — one from each side — and 12 people wounded, half of them soldiers trying to stop the clashes.

The fighting underscored how the bloodshed in Syria, where Assad’s regime is cracking down on an 11-month-old uprising against his rule, is enflaming emotions in its tiny neighbor Lebanon. The already deep divisions between Lebanese are being strained, and many fear Syria’s chaos will bleed over across the border.

Lebanon is sharply split along sectarian lines, with 18 religious sects. But it also has a fragile political faultline precisely over the issue of Syria.

There is an array of diehard pro-Syrian Lebanese parties and politicians, as well as support for the regime on the street level. There is an equally deep hatred of Assad among other Lebanese who fear Damascus is still calling the shots here. The two sides are the legacy of, and backlash against, Syria’s virtual rule over Lebanon from 1976 to 2005 and its continued influence since.

Tempers between the two sides are high enough. But Syria opponents worry the regime may intentionally cause trouble.

“The Syrian regime holds a lot of cards in Lebanon, and the biggest fear is that as the Assad regime gets more desperate, it would decide to use them to create regional chaos,” anti-Syrian politician Mustafa Alloush said.

Among those cards is Hezbollah, the Syrian and Iranian-backed Shiite militant group with an arsenal of weapons more powerful than that of the Lebanese army.

Already, any talk about Syria is potential cause for a fight.

On a political talk show on Al-Jazeera TV earlier this month, Lebanese writer and Syria supporter Joseph Abu Fadel flew into a rage over taunts from the other guest, a Syrian opposition member.

Abu Fadel leaped from his chair and charged around the table, fists clenched — and though the host got between them, he managed to land a slap on his rival’s face.

An earlier show on Lebanese television turned into a brawl when Alloush called Syria’s president a liar. His rival guest, Fayez Shukur, the head of the Lebanese branch of Syria’s ruling party, hurled a glass of water in his face.

Northern Lebanon, in particular, is a potential powder keg.

It has a strong Sunni Muslim population, sympathetic to its sectarian brethren who have been the backbone of the Syrian uprising. But it also has pockets of Alawites, the Shiite offshoot that makes up the majority of the Syrian regime’s leadership and to which Assad himself belongs.

The Friday-Saturday night clashes were between the mainly Sunni Bab Tabbaneh neighborhood and the adjacent, Alawite-majority Jabal Mohsen, on a hill overlooking its rival.

Short bouts of gunfire or grenade-throwing between them has been going on for years because of the sectarian tensions. But the violence has become more frequent as Syria worsens. Sunnis in Bab Tabbaneh resent their Alawite neighbors’ backing of Assad, while Jabal Mohsen residents accuse their rivals of giving aid to the uprising.

In Beirut last week, hundreds of Lebanese demonstrators faced off outside the Russian Embassy after Russia and China vetoed a Western- and Arab-backed resolution at the U.N. Security Council aimed at pressing Assad to step down. An army cordon separated the anti-Assad crowd from the president’s supporters to prevent clashes.

“Bashar, we are your men!” supporters shouted unanimously.

Many of Lebanon’s Christians, meanwhile, have been laying low on the subject of Syria.

Their community is divided between pro- and anti-Syrian camps. Even some Christian opponents of Damascus are hesitant about backing an uprising they fear will bring Sunni fundamentalists to power in Syria.

Patriarch Bechara al-Rai, head of the Maronite Church, which had long been critical of Damascus, raised an uproar in September when he warned that the Christian presence in the Mideast could be threatened if Assad falls. He said Assad should be given a chance to reform.

The tensions come at a time when anti-Syrian parties in Lebanon, which once ran the government, are weakened. They were replaced in 2010 by a government dominated by Hezbollah and pro-Syrian allies. Prime Minister Najib Mikati, a personal friend of Assad, says he isn’t taking sides in the crisis, adopting a policy of “disassociation.”

Still, opponents accuse the government of complicity with Damascus.

Lebanon voted against suspending Syria from the Arab League in November and was the only member state that did not endorse a League plan calling on Assad to transfer powers to his vice president.

“The Lebanese government is cooperating with the Syrian regime, they are only using this policy of disassociation as a cover,” Alloush said.

A longtime Syrian military presence in Lebanon ended after massive 2005 protests sparked by the killing of former Lebanese Prime Minister Rafik Hariri in a car bombing. Many Lebanese accuse Syria of involvement in the assassination, a charge Damascus denies.

A Western-backed, anti-Syrian government was elected, but its stint in power was plagued by constant feuds with Hezbollah, until the Shiite movement succeeded in bringing it down and elevating pro-Syrians to power.

Writing in the leading An-Nahar daily, political analyst Abdelwahab Badrakhan warned that Syria could stir up trouble in Lebanon to intimidate the West and “settle scores” with Arabs it accuses of conspiring against it.

Anti-Syrian politicians say they fear possible assassinations, recalling a string of unsolved killings of Lebanese critics of Syria in 2006. Last week, media reported that legislator Sami Gemayel had been warned by a security chief to take precautions because of a threat.

Alloush, the anti-Syrian politician, said he takes the warnings seriously.

“The Syrian regime is in trouble and as it goes down, the concern is that it will try to bring everyone down with it.”

Photo: A bullet hole in a window in Tripoli, Lebanon, Saturday, Feb. 11, 2012. Clashes between pro- and anti-Syria gunmen in the northern Lebanese city of Tripoli on Saturday left two people dead and 12 wounded in the latest skirmish between Lebanese factions over the crisis in neighboring Syria.- Bilal Hussein /AP Photo