One killed in clashes in Lebanon's Tripoli 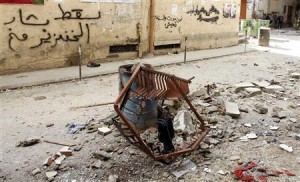 One person was killed and several soldiers wounded in street battles in Lebanon’s northern city of Tripoli Saturday, a security source said, in a second day of violence involving supporters and opponents of Syrian President Bashar al-Assad.

The coastal city is dominated by Sunni Muslims who support the 11-month uprising against Assad in neighboring Syria, but is also home to members of Assad’s Alawite minority.

Residents said rocket-propelled grenades were fired from the Sunni Muslim district of Bab al-Tabbaneh toward the Alawite district of Jebel Mohsen, but caused no injuries.

“We are the supporters of the Syrian revolution in Lebanon, and we are going to (fight) the shabbiha,” one of the gunmen said, referring to pro-Assad militias blamed by Syrian opposition activists for much of the killing in Syria.

A Lebanese army statement said troops had deployed in the Bab al-Tabbaneh and Jebel Mohsen districts to restore order and were “carrying out raids on sites that took part in the clashes,” making arrests and seizing weapons.

Several soldiers were wounded, one seriously, it said.

There are frequent clashes in Tripoli between rival sects, but tensions have heightened sharply since the outbreak of unrest in Syria. Friday’s violence came after hundreds of people demonstrated against Assad following weekly Muslim prayers.

Photo: Debris is seen scattered on the road in front of graffiti (L) that reads “Down with Bashar the Pig ” in the Sunni Muslim Bab al-Tabbaneh neighbourhood in Tripoli, northern Lebanon, on the second day of heavy gunfire and clashes, that has left at least one dead, February 11, 2012. REUTERS/Omar Ibrahim