Horror escalates in Syria as U.N. tries again for a resolution 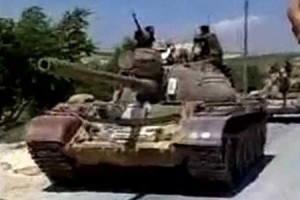 Hundreds of people have died in Homs in the past week and at least six were killed Saturday, said the Local Coordination Committees of Syria, a network of opposition activists. Homs, located in the country’s west, is Syria’s third largest city.

“Today is the seventh day in a row we’re under shelling — nonstop bombardment,” an activist named Omar said Saturday. He said government forces have surrounded the area with thousands of soldiers and dozens of tanks: “Not the normal tanks. Big tanks. Russian tanks.”

“We just want from Assad to give us permission to move the injured baby — they are just the babies,” said an activist named Omar, referring to President Bashar al-Assad. “They have to leave the area to have a good treatment. … He don’t even let us save and treat our (injured) babies.”

Unrest rippled in the south as five men in the southern province of Daraa were killed when a a tank attacked them in the town of Al Musefra, LCC activist Abu Oudai said. Daraa is where the government security crackdown and the nationwide uprising started in mid-March.

In suburban Damascus, another violent hotspot, an activist was killed, according to the Syrian Observatory for Human Rights, an opposition activist group.

The unrest spread to neighboring Lebanon, where sectarian clashes broke out in the city of Tripoli between members of al-Assad’s Alawite sect and Sunnis who staged a protest in support of the opposition. One person died, the Lebanese state-run NNA news agency reported Saturday.

World leaders have tried to pass resolutions denouncing the regime’s bloody crackdown, but have been stymied by Russia and China in sending a unified message.

Almost a week after Russia and China vetoed a U.N. Security Council resolution intended to stop the killing, Saudi Arabia has drafted a similarly worded document — but one that lacks the same punch.

The Saudi draft resolution will be submitted to the U.N. General Assembly, where vetoes are not allowed, but resolutions are not legally binding.

The three-page draft “strongly condemns” the violations of human rights by Syrian authorities. It cites “the use of force against civilians, arbitrary executions, killing and persecution of protesters, human rights defenders and journalists, arbitrary detention, enforced disappearances, interference with access to medical treatment, torture, sexual violence and ill-treatment, including against children.”

The text was provided to CNN by a diplomatic source on the condition that it not be posted in full because it could be amended. The U.N. General Assembly will convene Monday and will hear from U.N. High Commissioner for Human Rights Navi Pillay on Syria.

In addition, the U.N.’s Special Advisers on the Prevention of Genocide and on the Responsibility to Protect reiterated a concern it first expressed last July that “widespread and systematic attacks against civilians could constitute crimes against humanity under international criminal law.”

Both Russia and China, which have major trade ties with Syria, have said they support an end to the violence but disagreed with the text of the draft resolution they rejected last week.

“We do believe that, in order to stop violence, armed methods must be stopped not only by the government, but also by the opposition,” Churkin said. “That was the key flaw of the draft resolution.”

Turkish Foreign Minister Ahmet Davutoglu told reporters in Washington on Saturday that Turkey is kicking off an initiative with the U.N. apparatus in Geneva, Switzerland “to provide humanitarian aid flow to Syria.” He said he will speak by phone with U.N. Secretary-General Ban Ki-moon on Sunday about the effort.

CNN cannot independently confirm details of the fighting in Syria because the government has severely limited the access of international journalists.

But virtually all reports from within the country indicate al-Assad’s forces are slaughtering protesters and other civilians en masse. Opposition activists in Homs describe relentless bomb explosions from Syrian forces, wounded people bleeding to death in the streets because they can’t get medical attention and snipers picking off civilians running for cover.

Al-Assad’s regime has insisted its crackdown is aimed at armed gangs and foreign terrorists bent on destabilizing the regime.

But U.S. Ambassador to Syria Robert Ford said the truth is obvious.

“We know who’s shelling Homs,” he said. “It’s not the opposition, it’s the government.”

He cited a satellite photo of Homs, posted on the Facebook pagethat of the U.S. embassy in Damascus, showing a city marred by craters and lines of armored vehicles sitting in front of burned-out buildings.

“The armed opposition has rifles, machine guns, grenades, but it doesn’t have artillery. Only one side has artillery,” Ford said.

Davutoglu said Friday that al-Assad is “fighting against his own people” and “today, we are siding with the people of Homs.”

One opposition activist, speaking under the pseudonym “Danny,” said last week that the army launched a renewed attack on Homs after dozens of soldiers defected and fled into the city.

Since then, the violence has continued unabated, particularly in the Homs neighborhood of Baba Amr.

“There is still no escape from Baba Amr. Bashar al-Assad wants to wipe out this area,” a videographer named Rami said Saturday. “We have no medical supplies, and food is running low, but there is nothing people here can do.”

And attempts to rescue the wounded or retrieve the dead can be equally fatal.

“The Assad army is using (a) horrible way to shell the same point twice or more than one time, so it’s very dangerous to come close any place has been targeted,” Omar said.

But some residents hold their hopes on the defectors from the Syrian regime, some of whom now fight for the opposition Free Syrian Army.