Former ambassador: U.S. needs to do more in Syria 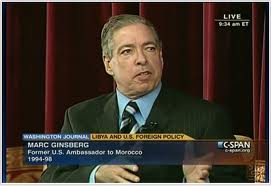 A former U.S. Ambassador said the Obama administration, in refusing to get more involved in the unrest in Syria, is “sitting back on its laurels in Libya,” while allowing the Syrian people to suffer.

In a recent article in The Huffington Post, Marc Ginsberg, former U.S. Ambassador to Morocco, wrote that there is a double standard in the United States’ reaction to the unrest in Syria compared to Libya.

“The administration makes this argument that Syria is a far more complicated situation that could spill over across the region,” Ginsberg said on “CBS This Morning: Saturday.” “Whereas with Libya, there was an imminent threat of a humanitarian catastrophe. Frankly, I argued in this article that that’s a double standard, that the slaughter that’s taking place in Syria, evidenced by the interviews by the U.S. Ambassador Robert Ford just in the last few days, is an indication that the administration needs to stop leading from behind here and needs to basically coordinate a major effort to try to stop the arms transfers that Russia has engaged in under the very guise of its own veto. If there is any country that’s actually engaged in militarizing the situation, it’s Russia under the cover of its own veto.”

Ginsberg said there are several actions the U.S. can take with regards to Syria, including bringing an indictment in the International Criminal Court against the regime of President Bashar Assad; launch a humanitarian corridor to Turkey to provide support for refugees and others fleeing the violence; continue to push the United Nations to put forth resolutions, daring Russia to veto them; and covert activity under the guise of humanitarian support.

“We’re not doing enough,” Ginsberg said. “It’s clear that this administration is sitting back on its laurels in Libya, and as a result the Syrian people are paying the price for the administration’s reluctance under the argument it doesn’t want to militarize the situation any further. It really needs to get more involved”.