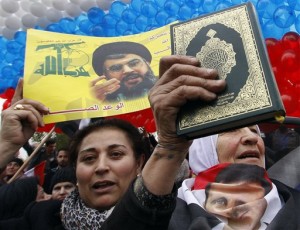 Corpses of 2 people allegedly belonging to Hezbollah members were reportedly transported to Lebanon from Syria on Friday, according to a report by al-Mustaqbal daily on Saturday.

The corpses were reportedly transferred to a hospital in the southern city of Tyre where forensics experts tried to inspect them, but were were not allowed by the Hezbollah group , which cordoned off the building according to the report

Hezbollah members reportedly removed the corpses, which were allegedly brutally murdered, to an unknown location.

But Hezbollah issued a statement denying the reports.

A Syrian officer who defected from the army revealed to Kuwaiti newspaper al Seyasseh during a visit to Abu Dhabi , United Arab e Emirates last December that more than 120 Hezbollah fighters and more than 40 members of the Basij militia of the Iranian Revolutionary Guard were killed during clashes with the the Free Syrian Amy between between October to December

The officer also revealed that tens of Hezbollah wounded and disabled fighters were being treated at Syrian hospitals in Damascus and northern Syria.