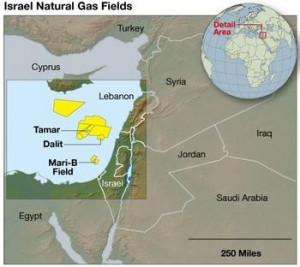 The Israeli government plans to build a floating liquefied natural gas terminal with a sea-based defense radar system off its Mediterranean coast while forming a naval force to protect its rich offshore gas fields against terrorist attack.

The terminal, which is scheduled to pump 87.25 billion cubic feet of imported gas into Israel’s energy network annually, is intended as a stopgap until the Jewish state’s new fields go on-stream in 2013 at the earliest.

The new fields, Leviathan and the smaller Tamar field, hold an estimated 25 trillion cubic feet of gas. Major new strikes are expected as Noble Energy Co., which has its headquarters in Texas, and its Israelis partners, extend exploration.

The U.S. Geological Survey reported that the Levant Basin, which covers Israel, Syria, Lebanon, Cyprus and the Gaza Strip, contains around 122 tcf of gas and at least 1.7 billion barrels of oil.

Israel’s big finds, which are likely to extend into Cypriot and Lebanese waters, significantly alter the strategic energy picture in the eastern Mediterranean.

Given the region’s history of war — the Arab-Israeli conflict and the historical Greece-Turkey rivalry which resulted in the 1974 division of Cyprus — there are fears this abundance of energy wealth could trigger new battles.

Lebanon, with which Israel is technically at war — they clashed in a 34-day war in the summer of 2006 — claims Israel’s Leviathan field extends into Lebanese waters.

Israel’s plans to defend its gas fields reflects its concerns that they are highly vulnerable to attack by terrorists using anti-ship missiles, frogmen or suicide bombers in boats packed with explosives.

In this regard, the main worry is the Iranian-backed Hezbollah in Lebanon, which Israel’s military says possess 42,000 missiles and rockets, including Chinese-designed C-802 anti-ship missiles that seriously damaged an Israeli corvette in the 2006 fighting.

Syria recently took delivery of 72 supersonic Russian-built P-800 Yakhont anti-ship missiles with a range of 190 miles and powerful enough to sink a large ship. Israeli leaders say they fears these could possibly be passed on to Hezbollah for use against the Israeli gas production platforms.

On top of that, in 2011 the Israeli navy seized an Iranian arms shipment, including six Nasr-1 radar-guided anti-ship missiles it claimed was bound for the Palestinian Hamas organization in Gaza.

Military commanders say the production platforms and associated installations will be prime targets if a new Middle East war erupts between Iran and the West currently confronting each other in the Persian Gulf.

Concerns have been heightened by a recent foray into the eastern Mediterranean by the Iranian navy. Two vessels transited the Suez Canal to visit the Syrian port of Tartus in Iran’s first naval mission into those waters since the Islamic Revolution of 1979.

Tehran has said it plans to deploy warships in the Mediterranean on a more regular basis. Most of the Israeli navy is deployed in those waters.

The strategic importance of the gas fields, which are expected to transform Israel’s economy and earn it billions of dollars in energy exports, is underlined by the plan to strengthen the navy at a time when the hard-pressed government is slashing the defense budget.

No details of the cost of the naval program have been disclosed. But The Jerusalem Post said some of it will be underwritten by state-owned companies tasked with constructing and operating the sea-based LNG facility several miles off the northern city of Hadera.

Up to now, Israel has been importing gas from neighboring Egypt, with which it signed a landmark peace treaty in 1979, supplementing gas from Israel’s only working gas field that’s nearly depleted.

The Egyptian gas supplies are problematical. The gas pipeline across the Sinai Peninsula has been attacked 12 times since the uprising in Egypt that erupted in January 2011. The latest bombing Sunday ruptured the line again.

Israel imported 43 percent of its gas from Egypt and that’s now been largely cut off. But that’s just half the problem.

The interim government in Cairo, installed after President Hosni Mubarak was driven from office Feb. 11, 2011, claims the fees for the gas were far too low. It wants hefty increases.

Israel’s reluctant to agree to that even though the Tamar field isn’t expected to begin production until 2013 at the earliest.