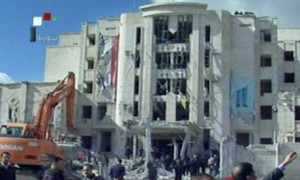 The attacks coincided with the continuation of an offensive against the central city of Homs, where activists claim hundreds have been killed in the sustained bombardment of neighborhoods loyal to the opposition during the past week.

The attacks in Aleppo, reported by state media, pointed to the danger that the violence now gripping the country will escalate and spread even as the government seeks to crush the revolt against President Bashar al-Assad’s rule.

The official news agency SANA said two “terrorist” attacks targeted a military security branch and a law enforcement headquarters in the center of Aleppo, a mostly middle-class mercantile city whose citizens have largely refrained from taking part in the mass anti-government demonstrations that have swept much of the rest of the country.

But in recent weeks there have been signs that the unrest is reaching into Aleppo, with protests erupting in several suburbs and some city neighborhoods as unhappiness grows with the levels of violence being used by the government to suppress its opponents elsewhere.

The Free Syrian Army, the fledgling rebel army that has strengthened as the opposition increasingly resorts to arms, recently announced it had formed an Aleppo battalion.

“While our soldiers were withdrawing, the explosions took place,” he said. “We don’t know what really happened. It could be that their bombs and ammunition blew up or that they staged the explosions to imply that the Free Syrian Army has sophisticated explosives.”

The attacks echoed a similar double bombing against security force branches on Dec. 23 in Damascus, which was attributed to suicide bombers and killed 44 people. Twenty-six more died in a bombing Jan. 6 that targeted police outside a mosque where protests typically occur.

The government blamed al-Qaeda for those attacks, but the opposition accused the authorities of carrying them out to taint the protest movement.

Photo: An image from Syrian television shows the scene of a bomb attack in Aleppo.