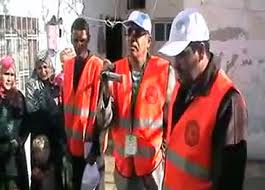 U.N. Secretary-General Ban Ki-moon said on Wednesday the Arab League chief told him he intends to revive an Arab League monitoring mission in Syria, which has collapsed amid continuing violence there.

Nabil Elaraby asked for U.N. help with the project during a telephone conversation on Tuesday, Ban told reporters after briefing the U.N. Security Council on a visit he just paid to the Middle East.

Elaraby had further proposed a joint U.N.-Arab League observer mission, including a joint special envoy, for Syria, where a harsh crackdown on an 11-month-old uprising has left thousands dead, according to U.N. figures. Ban said the United Nations was ready to help, but indicated no decision had been taken.

Elaraby “informed me that he intends to send the Arab League observer mission back to Syria and asked for U.N. help,” the U.N. chief said.

The mission first went to Syria in December, reaching a strength of 165 members, but the Arab League suspended it on January 28 because of worsening violence, although it did not wind it up. Six Gulf Arab states, Jordan and Morocco have pulled out their teams, but other members are still in Syria.

Elaraby told Reuters in an interview in Cairo on Monday that a new mission could be sent but under different terms and with more members.

“If we are going to send another mission, and we are contemplating that, it has to be stronger in numbers and in equipment. The mandate has to be different,” he said, adding it would need international not just Arab backing this time.

Arab foreign ministers have been planning to meet on Sunday to discuss the fate of the monitoring mission. It was not immediately clear whether the plan to revive the mission would go ahead anyway.

Ban said that “in the coming days we will further consult the (Security) Council before fleshing out details. We stand ready to assist in any way that will contribute towards improvement on the ground and to the overall situation.”

“No detailed discussions have taken place yet. We will have to discuss with the Arab League on detailed matters,” he said later in reply to questions.

Ban did not say what help the United Nations might give. U.N. diplomats and officials have spoken in the past of possible training of monitors.

A Security Council diplomat said discussion of any U.N. involvement was at an early stage. “I think what we would want to see would be a mission that was really making a difference, not just standing by and watching people being killed,” said the diplomat, who asked not to be identified.