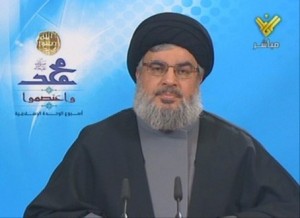 Hezbollah Secretary General Sayyed Hassan Nasrallah made another TV appearance on Tuesday via video link to tell the Lebanese that the time is not right for overthrowing the cabinet in Lebanon.

In a speech marking the anniversary of the birth of Prophet Mohammad, Nasrallah said contacts are being made to resolve the cabinet crisis . (A possible reference to Prime Minister Najib Mikati’s announcement that he will no longer call on the cabinet to convene before the issue of administrative appointments is resolved.)

“I am telling those who are preparing themselves for a new cabinet that there will be no new cabinet in Lebanon. This cabinet is the foundation of the country’s security and stability and it is not an appropriate time for overthrowing cabinets in Lebanon.”

“We have been receiving since 1982 all kinds of moral, political and material backing from the Islamic Republic of Iran,” Nasrallah boasted.

His statement marked the first time he has openly admitted the source of the military and financial backing for his party.

“In the past we alluded partially to this truth,” Nasrallah said. “We used to speak of a moral and political support while keeping silent when questioned about our military backing so as not to embarrass Iran.

“But today… we have decided to speak out.”

Nasrallah also denied reports that his organization was linked to the drug trade or money laundering, saying it did not need to engage in such illicit activities.

“Drug trafficking is banned in Islam,” he said. “And secondly, Iran’s backing spares us the need for even a penny from anywhere in the world.”

He added that Iran had never dictated conditions in exchange for its support.

He also stressed that Iran, his party’s main regional sponsor, would not ask his armed group to intervene should a military conflict erupt with Israel.

“Some are wondering what would happen if Israel bombed Iran’s nuclear facilities, and although I rule out this possibility I assure you that the Iranian leadership will not ask Hezbollah to do anything.

“On that day, we have to sit down and think before we decide what to do,” Nasrallah said.

The weapons according to experts are smuggled into Lebanon through the porous border with Syria, whose regime is also a staunch Hezbollah supporter.

Turning to Syria, Nasrallah denied reports that Hezbollah militants were fighting alongside government troops to put down a revolt that has claimed the lives of at least 6,000 people since mid-March, according to opposition activists.

“Part of the Syrian people are still with the regime and there is an opposition movement comprising popular, political and armed elements. Right now, there are several armed clashes while a vast part of Syria is enjoying stability. As to the outside forces, does anyone doubt that all the world powers are seeking to topple the regime in Syria?” Nasrallah said.

“They are saying that it’s too late to make reforms but how is it too late and there is a war in Syria?” he wondered, noting that “it’s not true that there is a sectarian war because most of those killed by the armed groups are Sunnis.”

Nasrallah stressed that those keen on Syria “should resort to dialogue.”

“What would help Syria now is a real dialogue table and betting on the U.S. would lead to further killing and civil strife,” he added.

Hezbollah is the only party in Lebanon that refused to surrender its weapons after the country’s 1975-1990 civil war on the grounds they are needed to protect the country from Israeli aggression, but in 2008 Hezbollah pointed its guns against the Lebanese and last year it toppled the the government of of former PM Saad Hariri