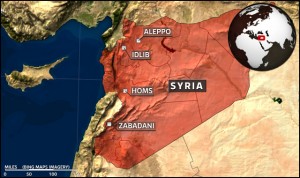 Last night our safe house in Homs turned into a makeshift field hospital for injured fighters and today funerals are taking place – as residents fear a full-on regime assault.

The first indicator last night came when injured soldiers started running into the house where we were staying, looking for medics.

The first guy had been shot in the leg and had a large gash across his eye and so they started treating him.

Within 20 minutes trucks started to pull up and fighters began to carry in wounded fighters – the first one had been shot in the back and leg.

Soft cushions, as typical in Arab houses, were moved into the centre of the room and used as padding to put the wounded fighters on for treatment.

Then another man was brought in. He had been shot in the chest and head. They used drips, tried painkillers, and started to work feverishly on him.

A third guy came through the door but collapsed right there and died – he had been shot in the heart.

Incredibly, he was left there and they simply carried other injured fighters over him.

One of those had also been shot in the chest but he was still conscious and in great pain.

There were two medics treating him as best they could but it was all very chaotic.

The family members of the young fighter who had died in the doorway in the middle of the night were trying desperately to get to him at the house.

His body was taken away and, with a small ceremony, buried in a cemetery.

This morning, quite early, the bombing started again. It is quite windy today and the sound of explosions travels.

We have moved from the house and the people of Homs are absolutely scared that the security forces are coming after them.

I know one of the Free Syrian Army commanders. He is very young and very down about the situation as they cannot see any way out of this for them.

There is another martyr, as they call it, being buried now.

Hundreds of men are coming from around the area, gathering outside the local mosque for what is a fairly big service.

Already, there are about 1,000 people gathered. Like other big funerals it is becoming a large political rally.

The army is not far from here but the funeral bolsters the fighters and their determination to oppose the regime.

By: Stuart Ramsay, chief correspondent, in Homs for