Clinton urges ‘friends of democratic Syria’ to rally against Assad 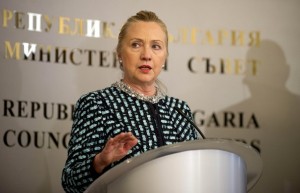 SOFIA, Bulgaria — U.S. Secretary of State Hillary Rodham Clinton called Sunday for “friends of democratic Syria” to unite and rally against President Bashar Assad’s regime, previewing the possible formation of a formal group of likeminded nations to coordinate assistance to the Syrian opposition.

Speaking in the Bulgarian capital of Sofia a day after Russia and China blocked U.N. Security Council action on Syria, Clinton said the international community had a duty to halt ongoing bloodshed and promote a political transition that would see Assad step down. She said the “friends of Syria” should work together to promote those ends.

Clinton was bluntly critical of Saturday’s veto by Russia and China at the United Nations blocking action against the continuing violence in Syria.

“What happened yesterday at the United Nations was a travesty,” she said.

“Faced with a neutered Security Council, we have to redouble our efforts outside of the United Nations with those allies and partners who support the Syrian people’s right to have a better future,” Clinton told reporters after meeting top Bulgarian officials.

Such a group could be similar, but not identical, to the Contact Group on Libya, which oversaw international help for opponents of the late deposed Libyan leader Moammar Gadhafi. However, in the case of Libya, the group also coordinated NATO military operations to protect Libyan civilians, something that is not envisioned in Syria. 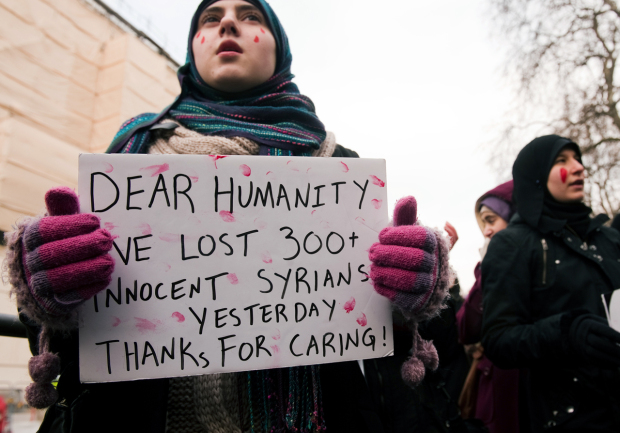 Clinton warned that a failure to act would increase the chances for “a brutal civil war” as many Syrians under attack from their government moved to defend themselves.

U.S. officials said a friends group would work to further squeeze the Assad regime by enhancing sanctions against it, bringing disparate Syrian opposition groups inside and outside the country together, providing humanitarian relief for embattled Syrian communities and working to prevent an escalation of violence by monitoring arms sales.

“We will work to expose those who are still funding the regime and sending it weapons to be used against defenseless Syrians, including women and children,” Clinton said. “We will work with the friends of a democratic Syria around the world to support the opposition’s peaceful political plans for change.”

Clinton’s comments came as Syria’s opposition appealed for international backing along the lines she suggested following the double-veto at the U.N. Security Council that outraged the U.S., its European allies and Arab leaders and intensified fears that Assad would unleash even greater violence to crush protesters.

Meanwhile, a Syrian state-run newspaper vowed Sunday that Damascus will press its crackdown on the uprising until stability is restored. Early Saturday, regime forces bombarded the restive central city of Homs in what activists said was the deadliest incident of the uprising. They reported more than 200 killed, but the regime denied any bombardment and there was no way to independently confirm the toll.

The Russian and Chinese vetoes at the Security Council effectively killed an Arab League plan aimed at ending the violence in Syria that called for Assad to hand over his powers to his vice president and allow creation of a unity government. The resolution would have expressed support for that Arab League plan, putting pressure on Assad, who has rejected it.

Clinton said that in the coming days she will consult closely with U.S. allies over what can be done to “rescue this deteriorating situation before it is too late.”

“Remember, in those 13 votes, you have not only Europeans, but you have Arabs, Africans, Latin Americans, South Asians. This was a unified international community seeking an end to the violence,” she said.

Proponents of the Arab League plan are now searching for an alternative to address Syria’s crisis, which the U.S. and many European countries have said can only be resolved by Assad’s leaving power.

Radwan Ziadeh, a prominent member of the opposition Syrian National Council said countries backing Assad’s foes should form an “international coalition … whose aim will be to lead international moves to support the revolution through political and economic aid.”

He said he expected French, U.S. and Arab support for a coalition.

A sensitive question is whether such a coalition would back the Free Syrian Army, a force of army defectors who in recent months have gone beyond protecting protesters in Syria to launching attacks on regime forces and trying to establish overt control in pro-opposition parts of the country.