by yalibnan
373
The veto cast by Russia and China on Saturday blocked action by the United Nations Security Council to back the Arab League's initiative to stop the killing and facilitate a political transition in Syria.
Share: 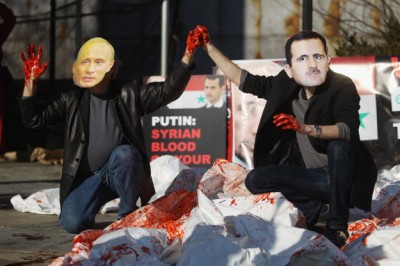 The veto cast by Russia and China on Saturday blocked action by the United Nations Security Council to back the Arab League’s initiative to stop the killing and facilitate a political transition in Syria. The vetos came despite a concerted effort by the resolution’s backers to meet the most significant objections, in particular their consistently repeated assurance that there would be no military intervention. It was not the “revenge of the BRICS” as some have suggested, since both India and South Africa backed the 13-2 majority (and Brazil would have done so had it still been on the Council). US Ambassador Susan Rice called the vetos “shameful.” I agree.

The failed UN resolution was not perfect, but for all the reasons I outlined last week it offered the best hope for mobilizing sustained international pressure on the Asad regime. It would have sent a powerful signal to Syrians on all sides of international consensus, held out at least some hope for a political path, and required observation of the mandated ceasefire and regular reporting to the Security Council. Many sympathetic with the Syrian opposition had blasted the resolution as worse than nothing since it did not authorize military intervention or, in its final version, explicitly call for Asad to step down. They were mistaken, as I think many now realize.

The veto will diminish the relevance of the United Nations and increase the odds that Syria will descend even further into a civil war fueled by a flood of weapons and aid to all parties. Before the vote, Secretary of State Hilary Clinton warned that “the endgame, in the absence of us acting together as the international community, is civil war.” She was right. The UN’s failure won’t end regional and international efforts to deal with the escalating brutality, but it will now force those efforts into other, less effective and less internationally legitimate channels. The already slim prospects for a “soft landing” in Syria, with a political transition deal ending the violence, are now closer to complete collapse.

I do not believe that we are heading for the direct American military intervention for which a vocal, if small, band of liberal hawks yearn, however. Nor should there be one. No advocate of American military intervention has yet offered any suggestions of how specific actions might actually produce the desired goals given the nature of the fighting. Air strikes and no-fly zones can not tip the balance in a civil war environment fought in densely populated urban areas where the U.S. lacks reliable human intelligence; recall that an air campaign took six months to succeed in Libya under much more favorable conditions. Safe area and humanitarian corridor proposals remain impractical. Advocates of military action should not be allowed to dodge the question of the likely escalation to ground forces — which virtually everyone agrees would be disastrous — after the alternatives fail. And there is zero political appetite for a military intervention: it is difficult to miss that every single speaker at the United Nations, including the Arab League and Qatar, explicitly ruled one out.

I expect calls to mount for the provision of weapons to the Free Syrian Army, or for that to simply happen without fanfare. But nobody should be fooled into thinking that this is a panacaea. Arming the weaker side in a fully-fledged, internationalized civil war is much more likely to produce a painful stalemate than a quick, decisive outcome. Asad’s allies will reciprocate with their own support. That support, along with a military which evidently remains loyal and willing to kill and intensifying sectarian dynamics which could keep fence-sitters with the regime, could keep a civil war going a long time. Syria would become a regional vortex, 1980s Lebanon on steroids: a protracted and violent civil war, fueled by arms shipments and covert, proxy interventions by all parties. Does anyone really think this is a good path?

Whatever the outcome of that battle on the ground, Syria under the Asad regime will never be rehabilitated in the region or the international community. In a statement shortly before the Council vote, President Obama declared: “The Syrian regime’s policy of maintaining power by terrorizing its people only indicates its inherent weakness and inevitable collapse. Assad has no right to lead Syria, and has lost all legitimacy with his people and the international community.” His strong statement, while more than justified, might have been better held until after the vote since it may have fueled suspicions about the objectives of the Arab League initiative. Indeed, Russia’s U.N. envoy Vitaly Churkin blamed the resolution’s backers for promoting a strategy aimed at “regime change” But if the goal of the veto was to keep the goals of international action limited, the result will be the opposite. The end of the UN option will now make the goal of regime change in Damascus more explicit.

It isn’t only the UN which will become less relevant. The Arab League is also about to become less effective, as the gavel moves from Doha to Baghdad at the end of March. It isn’t just that Prime Minister Nuri al-Maliki is sympathetic to Asad, on the Shi’a side of a new Arab cold war, or deferential to Tehran. It’s that Iraqi politics are themselves an ongoing muddle, leaving little bandwidth for any kind of foreign policy activism. What’s more, Iraq remains something of a pariah in the Arab world, particularly in the Shi’a-phobic quarters of the Gulf Cooperation Council such as Saudi Arabia and Bahrain (which has already announced that it will boycott the Arab Summit scheduled for Baghdad at the end of March). Arab divisions will likely become more evident than Arab unity as the crisis escalates, as the GCC pushes its own agenda and the Arab League reverts to its traditional impotence.

Part of my personal frustration lies in the effect that this will have beyond Syria. The U.S. and its allies will continue to find other ways to try to deal with the Syrian crisis, even without the UN. But the failure of the UN to act, as Secretary General Ban Ki Moon suggested, harms the institution itself by revealing its inability to act in defense of the Charter’s promise. The next stages, whether military or not (and I expect not), will more resemble the Kosovo and Iraq campaigns which were launched without international legitimacy. This will significantly undermine the prospects that such actions will contribute to the positive development of international norms of atrocity prevention or the more controversial “responsibility to protect.” That is tragic for an administration which has prioritized the UN and, with the exception of its hopeless diplomacy on the Israeli-Palestinian file, has done well with it.

I will have a report coming out soon which lays out some positive policy proposals for how to build more effective international action without war after the UN failure. Stay tuned.

Marc Lynch is associate professor of political science and international affairs at George Washington University, where he is the director of the Institute for Middle East Studies and of the Project on Middle East Political Science. He is also a non-resident senior fellow at the Center for a New American Security.