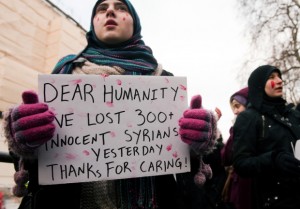 Russia and China’s veto on Saturday of a UN resolution on the bloodshed in Syria is a ‘shockingly callous betrayal’ of the Syrian people, Amnesty International said.

Moscow and Beijing have acted in a ‘completely irresponsible’ way, the London-based human rights group added. Russia and China vetoed a United Nations Security Council resolution condemning Syria for its lethal crackdown on protests, as activists said Syrian troops killed more than 230 people in shelling of the city of Homs.

‘The decision by Russia and China… is a shockingly callous betrayal of the people of Syria,’ Amnesty said. The group’s secretary-general Salil Shetty added: ‘This is a completely irresponsible use of the veto.

‘It is staggering that they have blocked the passage of what was already a very weak draft resolution. After a night in which the whole world watched the people of Homs suffering, the actions of these members are particularly shocking.’