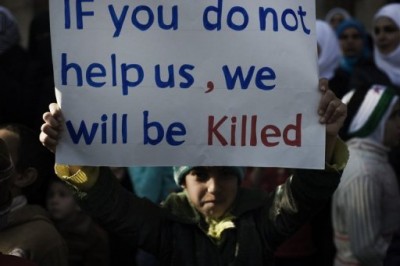 The Syrian army unleashed a massive attack on the city of Homs early on Saturday morning, bombing the protest hub and killing at least 260 people in a bloody “massacre”, activists and witnesses said.

The Syrian government denied involvement in the violence, blaming “armed gunmen”. Television stations showed images of bodies on the ground and buildings destroyed in a city turned into a war zone.

The grim toll, if confirmed, would mark the bloodiest day of the 10-month uprising against President Bashar al-Assad’s regime, with the United Nations Security Council to vote on Saturday on a resolution condemning the repression.

Protesters stormed Syrian embassies in Berlin, Athens, Cairo, Kuwait and London as the Syrian National Council opposition group called on the world to act to end a brutal campaign which activists say has killed at least 6,000 people since March.

“Assad forces randomly bombed residential areas in Homs, including Khaldiyeh and Qusur, which resulted in at least 260 civilians killed and hundreds of wounded, including men, women, and children,” said the SNC.

The “Assad regime committed one of the most horrific massacres since the beginning of the uprising in Syria,” it said in a statement.

The Al-Jazeera and Al-Arabiya television channels showed footage of dozens of bodies and scenes of chaos as tweets claiming to be by residents said the city “is bleeding” under heavy bombardment, one counting “366 explosions tonight so far.”

A medical student told Al-Jazeera the local hospital was struggling to cope.

“There is a lack of blood, a lack of oxygen … there is danger in the streets,” he said. “We are overwhelmed. We have opened the mosque next door” to receive wounded people, he said.

The Syrian Observatory for Human Rights director Rami Abdel Rahman said: “It’s a real massacre,” calling for the “immediate intervention” of the Arab League to end the killing.

But the Syrian government denied its army had shelled Homs and accused television stations of “inciting” violence, the official SANA news agency said.

“The civilians shown by satellite television stations are citizens who were kidnapped and killed by armed gunmen,” it said. It accused the gunmen of “wanting to use that information to (pressure) the Security Council”.

Hours before the UN Security Council was to vote on Saturday on a resolution condemning the violent repression in Syria, Russia reiterated the text “does not suit us at all”.

The text to be put to the vote on Saturday highlights the UN body’s support for an Arab League plan for a democratic transition while leaving out explicit references to calls for Assad to step down, a diplomat said on Friday.