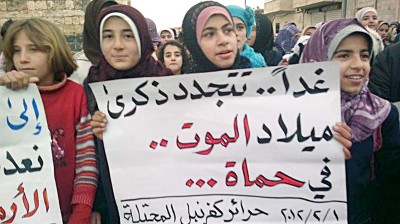 Syrian security forces fanned out in Hama on Thursday as protesters splashed red paint symbolizing blood in the streets to mark the 30th anniversary of a notorious massacre carried out by President Bashar Assad’s father and predecessor.

The Hama massacre of 1982, which levelled entire neighbourhoods and killed thousands of people, has become a rallying cry for the Syrian uprising that began nearly 11 months ago in the hopes of ending four decades of the Assad family rule.

Hundreds of troops and security forces were in Hama on Thursday, closing off public squares and setting up checkpoints.

“There is a checkpoint every 100 metres,” said Ahmed Jimejmi, a Hama resident.

Graffiti on the walls read: “Hafez died, and Hama didn’t. Bashar will die, and Hama won’t.”

Assad’s father, Hafez, ordered the scorched-earth assault on Hama 30 years ago to put down an uprising against his rule. Amnesty International has claimed that 10,000-25,000 were killed, though conflicting figures exist and the Syrian government has never made an official estimate.

For the next two decades, until his death, Hafez Assad ruled uncontested and the massacre was seared into the minds of Syrians.

Now, as the country faces a far larger revolt against Bashar Assad, the U.N. estimates more than 5,400 people have been killed in the government crackdown.

Also Thursday, a top defence official said Russia will not stop selling arms to Syria as Moscow stands by its longtime ally despite mounting international condemnation over the Syrian regime’s bloody crackdown.

Russia’s Deputy Defence Minister Anatoly Antonov said his country is not violating any international obligations by selling weapons to Damascus.

“As of today there are no restrictions on our delivery of weapons,” he told journalists in Russia, according to the country’s state news agencies. “We must fulfil our obligations and this is what we are doing.”

Moscow has been one of Syria’s most powerful allies — along with Iran — as Syria tries to crush the revolt against President Bashar Assad.

Moscow’s stance is motivated in part by its strategic and defence ties, including weapons sales, with Syria. But Russia also rejects what it sees as a a world order dominated by the U.S. Last month, Russia reportedly signed a $550-million deal to sell combat jets to Syria.

U.N. ambassadors this week are trying to overcome Russia’s opposition to a draft resolution at the Security Council calling for Assad to surrender power. Moscow says it would veto the draft because it believes it opens the way for eventual international military action.

“I found him relaxed and sure. He is confident in the Russian position,” Wahhab told the Lebanese newspaper Al-Akhbar in an interview published Thursday.

Wahhab said Assad told him he will end the uprising, because “the cost of chaos is much worse than the cost of decisiveness.”