Over70 Killed 1000 injured in Mayhem at Soccer Match in Egypt 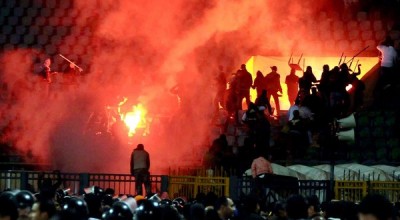 At least 73 people were killed in a brawl between rival groups of soccer fans after a match in the city of Port Said on Wednesday in the bloodiest episode of lawlessness since the ouster of President Hosni Mubarak one year ago.

Police officers around the stadium appeared unable or unwilling to control the violence, and video footage showed officers standing idle as groups of fans attacked each other with knives and other weapons.

In addition to the dead, Health Ministry officials said more than 1,000 people were injured, some from a stampede in the stadium. Locker rooms were turned into makeshift field hospitals, and by around 10 p.m. armored state security vehicles had arrived to transport the visiting team and its fans — from Cairo’s Ahly club — safely out of Port Said.

The newly seated Egyptian Parliament, which had adjourned until Monday, called a special session Thursday to discuss a response to the episode, and several other planned matches were immediately postponed.

The mayhem also focused renewed attention on the potential savagery of organized groups of die-hard fans, known here as ultras, who have emerged as a volatile component of Egyptian politics in the year of turmoil since Mr. Mubarak left power.

Previously apolitical, the ultras were known for their rowdy behavior, obscene chants and apparently endless enthusiasm for clashes with the often-brutal Egyptian police. “ACAB,” one group of Cairo ultras likes to spray-paint on city walls, standing for “All Cops are Bastards.”

The ultras joined the revolt against Mr. Mubarak on the first day of protests, taunting and harassing the police as they tried to crack down on thousands of other marchers heading for Cairo’s Tahrir Square. Protest organizers said they played a more central role in the so-called battle of the camels, helping beat back mobs of Mubarak supporters, some of them riding camels, in a daylong battle of rocks and Molotov cocktails.

Since then, however, the ultras have injected an unpredictable element of chaos into the frequent demonstrations over the course of the political transition here. They drove an assault on the Israeli Embassy that triggered a crisis in relations between the two countries last fall. They joined a weeklong battle with security forces near Tahrir Square that left more than 40 dead in November, and another outburst of street fighting near the cabinet building in which more than 15 people died in December.