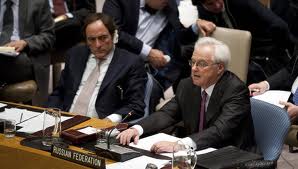 Russia’s envoy to the United Nations reportedly said Wednesday that the country would veto any U.N. resolution on Syria that it deemed unacceptable.

Reuters reported that Russia would veto any draft resolution calling on President Bashar Al Assad to leave his post unless the document makes clear that there would be no military intervention.

On Tuesday, Western powers and Arab countries at the U.N. sought to overcome Russia’s opposition to the measure. Addressing the Security Council, U.S. Secretary of State Hillary Rodham Clinton tried to allay Moscow’s concerns that the resolution could open the door to eventual military intervention in Syria, as took place in Libya last year.

“I know that some members here may be concerned that the Security Council is headed toward another Libya,” she said. “That is a false analogy.”

“It is time for the international community to put aside our own differences and send a clear message of support to the people of Syria,” Clinton said.

Russia has stood by Assad as he tries to crush an uprising that began last March. In October, Moscow vetoed the first Security Council attempt to condemn Syria’s crackdown and has shown little sign of budging in its rejection of the new measure.

The latest resolution would demand Assad carry out an Arab League peace plan by which he would hand his powers to the vice president and allow formation of a unity government to pave the way for elections.

On Wednesday, shelling and machine gun fire rattled in towns along the Wadi Barada, a valley in the mountains a few miles northwest of Damascus near the Lebanese border, according to online video posted by activists.

The valley leads to the mountain resort town of Zabadani, an opposition stronghold that has been under the control of rebel soldiers and protesters for several weeks.

At least six army defectors were killed in the fighting, according to the British-based Syrian Observatory for Human Rights, which said some of the regime forces battered the towns of Deir Qanoun and Ein al-Fija, causing an unconfirmed number of casualties.

Another activist group, the Local Coordination Committees, said at least 17 people were killed in the valley, including five military dissidents from the group known as the Free Syrian Army. It was impossible to reconcile the two group’s figures. 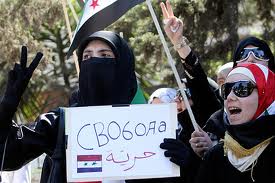 The fact that rebels made it to the doorstep of Damascus, the seat of Assad’s power, was a dangerous development for the regime. Rebel soldiers had grown bolder, setting up checkpoints and protecting protesters in suburbs surrounding Damascus.

But a military offensive largely succeeded in crushing the remaining resistance on the eastern side of the capital by Tuesday. The LCC said troops were raiding homes in some of those suburbs Wednesday, looking for activists.

In the central city of Homs, one of the biggest flashpoints of the uprising and a scene of daily fighting, government troops were shelling neighborhoods and fighting defectors in several neighborhoods. At least eight residents were killed, the Observatory said.

Regime troops were also fighting defectors Wednesday in the northeastern region of Idlib and the southern area of Daraa, activists said.

The U.N. estimated several weeks ago that more than 5,400 people have been killed in the Syrian government crackdown, but has not been able to update the figure. The death toll from Monday’s offensive in the suburbs was around 100 people, making it among the bloodiest days since the uprising began, according to the two activist groups.

The U.N. Security Council resolution would give Assad 15 days to start implementing the Arab peace plan and halt the crackdown, otherwise the Council would consider “further measures.”

That would likely mean economic and other sanctions. But Moscow says it could lay the groundwork for later military intervention. Russia, a longtime ally of Assad, has insisted the crisis can be resolved by negotiations and that U.N. action thwarts any dialogue.

Arab officials joined Western countries in trying to persuade Russia to back the measure.

Deputy Arab League Secretary-General Ahmed bin Helli said Wednesday the League sought the U.N. resolution to back its peace plan and boost an Arab solution for the crisis, not to bring in international military action.

The League “is still committed … to solving this crisis in the Arab framework, away from any outside intervention,” he said during a visit to Baghdad.

Moscow’s stance is motivated in part by its strategic and defense ties, including weapons sales, with Syria. Russia also rejects what it sees as a a world order dominated by the U.S.