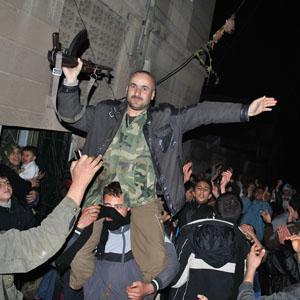 Syrian activists say that in the last few days there has been a spike in violence in the city of Homs. Fighters from the Free Syria Army claim they have taken control of a Homs suburb.

Video, taken from a cell phone, appears to show Free Syria Army fighters celebrating as a rocket-propelled grenade destroys a government tank. Two soldiers on board manage to flee under heavy fire.

VOA obtained the video from a rebel fighter, who says it was shot very recently in the Baba Amr suburb of Homs. It cannot be verified independently, but it tracks with reports from activists and the United Nations officials which suggest Homs has become one of the bloodiest battlefields in Syria’s uprising.

The fighter who took the video claims the Free Syria Army is scoring significant victories against government forces. The government has scoffed at such claims. “I feel that the Free Syria Army has done well in Homs,” he said. “We’ve managed to take over a whole neighborhood, Baba Amr, and a whole lot of adjacent areas. We’ve driven out all government forces and all the secret police. We’re taking care of the people and we’re protecting them.”

The Syrian government blames terrorists acting out a foreign conspiracy for the nationwide uprising, It says thousands of security forces have been killed in flashpoint cities like Homs.

Video obtained by VOA shows the carnage from fighting in Homs. Burnt out tanks litter the streets.

Free Syria Army fighters say they are an organized force, commanded by a senior defector from the Syrian Air Force. “We all take our orders from Colonel Riad al-Assad in Turkey,” one fighter says. “Each unit is given a name, it’s not random. We are called the Farouk unit, the ones from Baba Amr. So each unit, for example in Zabadani or Douma or wherever will have a name, each unit will take orders, each unit has somebody in charge,” he said.

Activists say at least 74 people were killed in Homs in a two-day-span last week as government forces attacked residential areas with mortars and gunfire. There are also reports of a spike in sectarian killings in Hoims between Sunnis and Alawites tied to the Assad regime. Some opposition fighters say international help would bring a quick end to the conflict.

“Definitely what we need is a safe haven. Because as much as 90 percent, or let’s just say even 80 or 70 percent of [President] Assad’s Syrian army is willing to defect,” says one of the fighters. “But they need somewhere to defect to. The moment they have somewhere safe, you will see it, it will be like an avalanche. So we need international protection, we need a no-fly zone.”

Later it appears the protest comes under fire, as yet another battle between pro- and anti-government forces escalates.