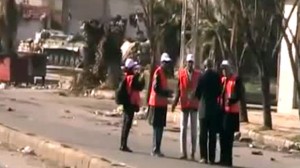 The deputy chief of the Arab League says the pan-Arab body has halted its observer mission in Syria because of the increasing violence there.

Deputy Secretary-General Ahmed Ben Heli says the around 100 observers still in Syria have stopped their work after a decision by member states because of the sharp spike of bloodshed in recent days. He says the observers are staying in their Damascus hotel until further notice.

At least 80 people have been killed in the past three days in Syria. Arab League chief Nabil Elaraby and the prime minister of Qatar are heading to New York on Saturday to seek U.N. support for an arab plan to end Syria’s crisis.

BEIRUT (AP) — Syrian government forces clashed with anti-regime army defectors across the country on Saturday, as the Arab League’s chief and the prime minister of Qatar were set to depart for New York to seek U.N. support for the latest Arab plan to end Syria’s crisis.

At least nine were reported killed in the clashes and other violence, bringing the death toll for the last three days to over 80 and adding urgency to attempts by Arab and Western countries to draft a political settlement to end 10 months of bloodshed.

But the initiatives continue to face two major obstacles: Damascus’ rejection of a peace plan which it says impinges on its sovereignty, and Russia’s willingness to use its U.N. Security Council veto to protect Syria from sanctions.

Although Damascus has been relatively quiet since the uprising began, its suburbs have witnessed intense anti-regime protests and army defectors have become more visible and active in the past few months.

In the eastern oil-rich province of Deir el-Zour, an oil pipeline took a direct hit and caught fire as government troops shelled a town, activists said.

The British-based Syrian Observatory for Human Rights and the LCC said the early morning shelling of the town of Qoriah killed at least one person and set the pipeline on fire.

Syria’s state-run media blamed anti-government “terrorists” for the attack, saying the fire was extinguished four hours later. It said the pipeline carried crude oil from al-Omar field to a station in the area.

SANA also reported that Syrian troops prevented gunmen from crossing from neighboring Turkey into the northwestern province of Idlib. SANA said a Syrian soldier was wounded while many of the infiltrators were either killed or wounded, adding that the rest returned to Turkey.

The Free Syrian Army force of anti-regime military defectors is based in Turkey, and its fighters frequently try to cross into Syria through the mountainous border area in the northwest.

The LCC and the Observatory also reported intense fighting between troops and defectors in the town of Rastan near the restive central city of Homs.

The observatory said at least two people were killed across the country in Saturday’s violence while the LCC said six died, most of them in the central city of Homs, which has been one of the areas hardest hit by government crackdowns.

Arab and international pressure meanwhile is increasing on Damascus.

Arab League chief Nabil Elaraby and the prime minister of Qatar were set to leave for New York on Saturday to seek U.N. support for the latest Arab plan to end Syria’s crisis. The plans calls for a two-month transition to a unity government, with Assad giving his vice president full powers to work with the proposed government.

Syria has rejected the proposal, saying it violates its sovereignty.

The U.N. Security Council began closed-door negotiations Friday on a new Arab-European draft resolution aimed at resolving the crisis, but Russia’s envoy said he could not back the current language as it stands.

Any resolution faces strong opposition from China and Russia, and both nations have veto power. Russia’s U.N. Ambassador Vitaly Churkin told reporters that the text introduced by new Arab Security Council member Morocco has “red lines” for Moscow, but he’s willing to “engage” with the resolution’s sponsors.

Churkin said those lines include any indication of sanctions, including an arms embargo. “We need to concentrate on establishing political dialogue,” he said.

The United Nations estimates that more than 5,400 people have died in Syria’s turmoil.